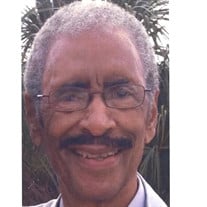 James Henry Chandler, was born on Wednesday; February 26, 1936 to Charles and Annie Chandler of Winter Park, Florida. Dr. Wells delivered him in their home on 225 W. Lyman Avenue, with the help of a midwife. A spirited toddler, "Jamesy", as he was affectionately known, gave each of his younger sisters nicknames when they were born" "Teedum" (Mary Elizabeth) and "Miney" (Mae Riner). The family consisted of : "Papa Charles", "Mother Dear", "Sister" (Annie Runell), Brownie: (the dog) and Tommy (the cat). Mother Dear, a devout Christian, made sure her children (and, eventually, grandchildren) "knew The Good Lord". She took them with her to Flowers Temple Church of God in Christ, day and night (often seven days a week). James was a mischievous child, notorious for annoying his siblings for fun. In the early 50's, Mother Dear and Papa Charles purchased a plot of land on Garfield Avenue. About a year later, they moved into their newly-built home at 457 Garfield Avenue. James matriculated through school at Hungerford in Eatonville. Although, he "did not care for school", he participated in many extracurriculars-often in leadership roles. Notably, he was the drum major of the high school marching band for which for which his younger sisters were also majorettes. When he was older, James loved to share a comical story from back then, about a power struggle between he and teedum, to lead the band. Perhaps, she was getting back at him for all of the times he had delighted in aggravating her, as children. It was during this time, that his first son, Kelvin Lampkin, was born. After high school, James was "not interested in college", however, his father insisted that he "pick up a trade". When James could not choose one, his Papa strongly recommended barbering. So, James enrolled in Florida A&M University, in Tallahassee, FL, to become a barber. Once licensed, James went to work in Winter Park's Deluxe Barber Shop with his brother, Charles', close friends: James "Dick" Dixon and Alonzo "Trick" Roberts. James married Betty Jean Dorsey in 1957 and they soon had a son, Gregory Ronnell. Cedric Orrin was born two days later. During this marriage, James and Betty owned and operated multiple businesses, including the Washington Shores Barbecue Restaurant. In this period, James also fathered Yvonne Roux, Ronnie Chandler, Linda Chandler and James Chandler, Jr. He married Patricia Taylor in the late 60's; then, he married Frankye "Jackie" Grant in 1969. During his third marriage, he and Jackie had Toddrick Gerryll.. CeWyon Quinae was born a year later and Cory Charles, two years after that. James' reputation as a master barber grew over the years. In the early 80's, he opened his flagship business: Chappy's Barber Shop. He operated Chappy's for over 40 years before retiring. He, Then, moved to Cocoa Beach, FL, where he shared a life with a dear companion, Rose Houston Smith. For well over 60 years, James made an impact on the lives of countless people, influencing many to be entrepreneurs-including several of his children. He was even honored in an exhibit at Loch Haven Art Museum, as an esteemed, business owner and integral part of Winter Park History. Chappy was youthful and full of life: known for giving sage advice, accompanied by witty one-liners! He leaves to cherish his memory: his big sister, Annie Runell (Charles), Huntsville, AL; son, Gregory Chandler, Orlando, FL; daughter, Yvonne Roux (Dave), Altamonte Springs; FL; daughter, Linda Beacham (Ronnie), Grady, AL, Son James Chandler, Jr. Grady, AL; son, Toddrick Chandler, Philadelphia, PA; daughter, CeWyon Chandler-Ward (Reginald), Lithonia, GA; and, son, Cory Chandler (Leza), Savannah, GA. He also leaves a host of BELOVED grandchildren, great grandchildren, nephews, nieces and cousins. He is predeceased by his mother, Annie (Smith) Chandler; father, Charles Chandler, Sr.; son, Cedric Chandler; nephew, AIkin Moore; sister, Mae Riner Chandler; sister, Mary: Elizabeth Davis; son, Kevin Lampkin; wife, Frankye Chandler; brother, Charles Chandler, Jr.; nephew, Kim Chandler, and son, Ronnie Chandler. Multiple generations entrusted James Henry Chandler to give babies their first haircut; fresh cuts for weddings and other momentous occasions; and, even final haircuts for their loved ones' homegoing services. He was loved, admired and respected by many. For this, he was extremely grateful. His MOST cherished role, however, was that of father and grandfather. His family was everything to him, as was he, to them!

James Henry Chandler, was born on Wednesday; February 26, 1936 to Charles and Annie Chandler of Winter Park, Florida. Dr. Wells delivered him in their home on 225 W. Lyman Avenue, with the help of a midwife. A spirited toddler, "Jamesy", as... View Obituary & Service Information

The family of James Henry "Chappy" Chandler created this Life Tributes page to make it easy to share your memories.

Send flowers to the Chandler family.