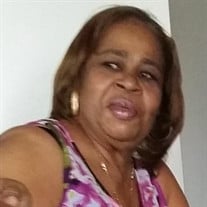 To view the service for Yolanda Teresa Brooks’ live stream please use the link below: www.facebook.com/ZandersFuneralLIVE Yolanda Teresa Brooks-Perry was born on October 2, 1945 in Ancon, Canal Zone. “Yoli” as she was affectionately known, was the first-born child of Millicent and Lionel Perry. She grew up in Santa Cruz, Gamboa Canal Zone where she was an exceptional athlete and enjoyed playing on the local basketball and softball teams. In 1964, she became a graduate of Paraiso High School. A year later in 1965, she married her beloved Alfredo “Tito” Brooks. Their union was blessed with sons Alfredo and Deron. Together their family unit was joyful, loving, and so welcoming, that neighboring children and friends were a constant fixture within their home located in Villa Rica, Panama City. Yoli’s larger than life personality and variety of homemade punches/”chichas” were always in abundance. Her light shined most brightly when hosting her famous monthly Pokeno and Bingo nights. The friends in attendance shared in her love for cooking and baking. Yoli’s compassion was endless, and she was instrumental in nurturing her cousin Dazzell Marshall and nephew, Anselmo Cummings in their early childhoods. She welcomed them into the fold and raised four boys providing for their every need with the upmost love and affection. Their heartfelt memory is of “mama” taking them to the drive-in theater in Panama City, back in the 1980’s. She would pile them all into the back of the family Plymouth station wagon, with enough room to include their cousins and neighborhood friends. Yoli always made sure there was popcorn and soda for all. As a result of her generous spirit and pleasant personality, she was loved by many. Yolanda reveled in being the oldest child and her sisters, Lauren, and Esmeralda recall “the look” they would get from her when they were getting out of line. To them she was a perfectionist always striving to make sure everything was at its best, and especially “done her way.” Yoli was a fashionista who enjoyed dressing in the latest fashions and hairstyles. Later in life, Yolanda brought great joy to her mother and Aunt Kathleen Wade. She would frequently travel out to Paraiso, to spend time with them and delighted in catering to their needs. In 2005, Yoli fulfilled a lifelong dream and migrated to the United States to be with her sons and grandchildren. Her grandchildren Rashawn, Keon, Shirley, Adriel, Shamar, Shanice, and Khloe; were the source of her happiness. She loved to attend all their activities: basketball, football, soccer, and dance rehearsals. She was devoted to Christ and became an active member of the Agape Assembly Baptist Church in Orlando, Florida, faithfully serving in the Women’s Ministry. She proudly coordinated food distributions with the Community Pantry. Yolanda was a sports enthusiast and passionately supported her Los Angeles Lakers, New York Yankees, and New Orleans Saints. She could recall game plays, player statics, and flawlessly provide insight and analysis. She passed peacefully on Tuesday, April 20th, 2021, in Orlando, Florida. Her beautiful life will forever be cherished in the lives of her children: Alfredo Brooks, (Ayana), Deron Brooks (Kamilah) and Dazzell Marshall; 7 grandchildren; sisters Lauren Penick and Esmeralda Hamilton, aunt Ivy Stewart; and uncles Hugh Marshall and Chester Marshall; as well as a host of devoted nieces, nephews, cousins, and friends. Yolanda now rejoices in Heaven and her memory will carry on in our hearts forever.

To view the service for Yolanda Teresa Brooks&#8217; live stream please use the link below: www.facebook.com/ZandersFuneralLIVE Yolanda Teresa Brooks-Perry was born on October 2, 1945 in Ancon, Canal Zone. &#8220;Yoli&#8221; as she was affectionately... View Obituary & Service Information

The family of Yolanda Teresa Brooks created this Life Tributes page to make it easy to share your memories.

Send flowers to the Brooks family.