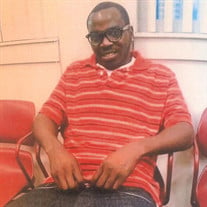 Willie Anderson, Jr. a.k.a. Junior, was born on July 25, 1982 to Willie James Anderson and Barbara Robinson Williams in Deland, Florida. He was the 4th of 7 children. The family later moved to Osteen, Florida, where Willie attended Pine Ridge High School until 11th grade. Willie’s relationship with family meant the world to him. He was the father of 5 children whom he loved dearly. He was always a free spirit making friends wherever he went. He was a true friend with a big heart and knew how to put a smile on your face. Willie was known as a “Jack of All Trades.” whatever he put his hands to do-He Did It. He was a mechanic, did roofing, landscaping, insulation almost anything that needed to be fixed or repaired. For enjoyment and relaxation, he loved football, basketball, riding bikes and his all time favorite, fishing. Willie was also known to have a BIG appetite. We often said, “he could eat and sleep at the same time. His most cherished food was peanut butter. Willie faced many challenges and obstacles in his life, but he was a tough fighter, not a quitter. With faith in God and strong family support, he faced the giants head-on and defeated them all. Willie’s favorite saying was “Everybody Aint Able.” Willie was preceded in death by his father, Willie J. Anderson and mother, Barbara Robinson-Williams. Willie leaves to cherish precious memories to his children: daughters: Jordan Anderson-Chess and Kyla Anderson-Chess, both of Orlando, Florida and Kimberly Anderson and Keke Anderson, both of Apopka, Florida; son: Jaylyn Anderson of Orlando, Florida; siblings, sisters: Dorothy Anderson, Josette Anderson and Bessie Anderson, all of Altamonte Springs, Florida, Debbie Capers (Wallace) of Apopka, Florida, and Genise Boney (Curtis) of Deltona, Florida; brother: James Anderson of Sanford, Florida; a host of aunts, uncles, nieces, nephews, cousins, other loving relatives and friends.

Willie Anderson, Jr. a.k.a. Junior, was born on July 25, 1982 to Willie James Anderson and Barbara Robinson Williams in Deland, Florida. He was the 4th of 7 children. The family later moved to Osteen, Florida, where Willie attended Pine Ridge... View Obituary & Service Information

The family of Willie Anderson, Jr. created this Life Tributes page to make it easy to share your memories.

Send flowers to the Anderson, family.