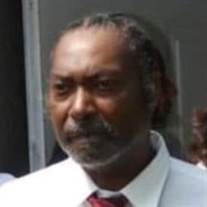 William Darnell Toney was born on June 26, 1959 to parents, Cleotha (Bootsie) Toney and Willie Toney in Orlando, Florida. He was educated in Orange County Public Schools. William was an avid fisherman. He also enjoyed traveling with his companion... View Obituary & Service Information

The family of William Darnell Toney created this Life Tributes page to make it easy to share your memories.

Send flowers to the Toney family.