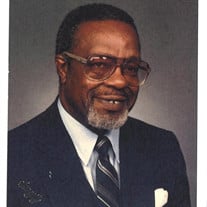 William Johnson was born June 30, 1929 to the late Robert and Celestine Johnson. On March 12, 2021, he quietly slipped away into eternal rest. He was preceded in death by his seven brothers: Robert, Harold, Alvin, Daniel, Wesley, Freeman and Carol. At an early age William joined the “Wells Cathedral Evangelical Church” in Newark, New Jersey. As a young talented baritone, he and his brothers, along with other family members were privileged to travel throughout the East Coast singing Gospel Music until he graduated high school. After moving to the Washington, DC Metropolitan area, he joined the Alfred Street Baptist Church in January 2003. At Alfred Street, he was an active member of the Male Chorus, served as its Chaplin and was a member of Discipleship Group #30. William attended the Newark, New Jersey Public School System and graduated from Southside High School. He played quarterback for the Shaw University Bears and graduated with a Bachelor of Science Degree. He earned a Master’s and Directorate Degree from Indiana University, and was an “All but Dissertation (ABD), Candidate from George Washington University. He had a successful Military career in the Air Force with duty stations that included: Eielson AFB in Alaska, Great Falls AFB in Montana, and Westover AFB in Massachusetts. During his time in the service, he quarterbacked the Air Force’s football team “The Outlaws.” As a PFC, A/1C, SSGT and SSG-5, Mr. William Johnson received the National Defense Service Medal. His most significant duty assignment was the HQ 5010th Air Base Wing at Eielson AFB, Alaska. Following his honorary service in the Air Force. His academic experiences included 32 years of distinguished service at Howard University from 1969 – 2001. Professor Johnson was often referred to as “Bill” or “Chief.” Prior to his tenure at Howard University, Bill was a principal and teacher in Charlotte, NC. He bought to the profession a warm, wise, cooperative, compassionate, and caring perspective that was valued by many who sought him out from far and near. As an administrator, educator, leader, and coach, Bill Johnson was an outstanding Health and Physical Educator who taught Anatomy, Kinesiology, Fencing and Gymnastics. Over the years, he coached both Football, Track and Field, and hosted a community oriented program in both Fencing and Gymnastics. He initiated and directed the NYSP – NCAA Youth Program at Howard University. For many years, he served as the Associate Chair for the Department. He served as President of the District of Columbia Association for SHAPE (Society of Health And Physical Educators) and President of NHFA (National Health and Fitness Association). One of the things he enjoyed most during his active professional life was his relationship with his students. He was a curriculum and instructional consultant for collegiate academic programs in Haiti, Jamaica, and Barbados. One of his most notable examples of scholarship is the co-authored book chapter in Brooks & Althouse’s (2000) landmark text Co-authored with Dr. Doris Corbett Johnson, his wife on “Racism in College Athletics.” Professor Johnson has provided the field with strong, loving, capable young men and women who continue to follow his leadership. William Johnson (Chief) was united in Holy Matrimony to Dr. Doris R. Corbett Johnson. From a previous marriage, he had one daughter, Annie Celestine Johnson. Chief leaves to cherish his memories: his devoted wife, Dr. Doris Corbett Johnson who loved him dearly and will never forget the bond they shared for 39 years; his loving daughter, Annie Celestine Johnson, Temple Hills, Maryland; a cousin who grew up in the same household and was more like a brother, Preston Paige, Capitol Heights, Maryland; three sisters-in-laws: Dr. Barbara Corbett Howard, Mount Dora, Florida (identical twin sister to Doris) whom he sometimes confused with his wife; Juanita Johnson, Plainfield, New Jersey and Carolynn Johnson, Durham, North Carolina; brother-in-Law, Herman Jones Corbett, Philadelphia, Pennsylvania; a niece he help raise, Cynthia Leggett Breeden, Fayetteville, North Carolina; nephews Daniel Tariq Johnson of Baltimore, Maryland, and James Marcus Howard, Woodbridge, Virginia both of whom were particularly close to Chief and felt they were more like sons. As the family patriarch, his spirit will live on forever in the hearts and minds of a host of family, colleagues, students, and friends

William Johnson was born June 30, 1929 to the late Robert and Celestine Johnson. On March 12, 2021, he quietly slipped away into eternal rest. He was preceded in death by his seven brothers: Robert, Harold, Alvin, Daniel, Wesley, Freeman and... View Obituary & Service Information

The family of Professor William Johnson created this Life Tributes page to make it easy to share your memories.