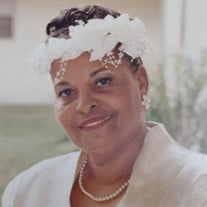 Velma Patricia Faust was born August 25, 1939, to Julia Lee and Howard Faust. Velma was the second of five children from that marital union in Arcadia FL. Julia went on to have four more children which gave Velma a total of eight siblings. Velma's walk with God began at an early age at St. John Missionary Baptist Church in Arcadia, where she sang in the choir and was active as a youth in church activities. As a teen she attended Smith Brown High School where she was also active, playing clarinet in the marching band and being crowned Miss Smith Brown in 1957 her senior year. Velma met Herbert Hodges who played trombone in the Smith Brown band and her first child Jennifer was born of that union; they married and moved to Miami in 1961. Their second child Zenobia was born in 1965. Velma then joined Second Baptist Church in Richmond Heights where she served, and years later she joined Glendale Baptist Church. She was highly active in both churches. Velma was a nurse's aide and she worked at the Dept. of Recreation in Richmond Heights at the community pool. She then got an opportunity to study to work in the Miami Dade Public School System and become an Occupational Specialist where she had an impressive 25-year career. During that time at McArthur Senior High a school for alternative youth where Velma's impact on those youth was invaluable. She ministered to them, encouraged them, disciplined them, and taught them how to conduct themselves and dress in interviews, the workplace and wherever they went. She taught by example because Velma went to school fly every day, matching from head to toe. She also formed a lot of friendships while working in the school system and a substantial number of students came back to thank Velma for how she blessed them. In 1997 Velma retired and she left Miami and moved to Winter Springs, FI. Velma loved her children, but when she became a grandmother to Patrick, Travis, the late Jeremy, Jason, Quianna, and her beloved Ashlei, that job she took seriously and literally and gave her all to them as she raised four of the six and one great granddaughter Porsha. She became affectionately known as "Gramz" to them and all the grandchildren's friends. Velma became a member of Antioch Missionary Baptist Church in 1997 and brought all her grandkids to church and instilled the love of God in them not just at church but also by the way she lived her life. Velma was a Deaconess at Antioch, a part of the women's ministry and the Golden Saints for years. She taught young girls in the church etiquette by organizing a yearly event called "Having Tea with God." The girls really enjoyed learning how to conduct themselves at home and in public as a young lady along with life lessons that Velma taught. Two beautiful friendships were developed by Velma at Antioch with the late Marjorie Murphy and Sue Carter, three strong pillars of the church. Their Pastor Charles Jones got three surrogate moms in them. The 3 Ma's. "Ma Sue," "Ma Murphy" and Velma was "Ma" to him. As Velma's health began to decline the last few years of her life, her granddaughter Ashlei stepped up with no hesitation as caregiver until one year prior to her death. Velma was really proud of Ashlei and the sacrifice she made to take care of her. Feisty and no-nonsense, that is what she was, but no one was more giving and more full of love for family and friends than Velma Faust and that was because of the love of Christ that lived deep on the inside of her. She lived what she preached and taught. Her faith was unshakeable, and she was unashamed to share the goodness of Jesus. Though she suffered many trials, tribulations, and sickness her faith in God only grew stronger. It bears repeating Velma lived what she believed despite it all even until the end. Velma's legacy will live on for generations as she is lovingly remembered by her loving family. Velma was preceded in death by her daughter Zenobia, her grandson Jeremy, her great granddaughter Alexis, and her son-in law Michael. Those left to celebrate her life for years to come are her daughter Jennifer, her surviving grandchildren Patrick, Travis, Jason, Quianna, and Ashlei. Great grandchildren-Malachi, Porsha, Jayden, Isaiah, Amaya, Olivia, Zion, Jeremiah, Zenobia, Zaier ,Kash, Evadne, Jiraiya, Amina, Jordan, Zoey, Zahkai and Temari.

Velma Patricia Faust was born August 25, 1939, to Julia Lee and Howard Faust. Velma was the second of five children from that marital union in Arcadia FL. Julia went on to have four more children which gave Velma a total of eight siblings. Velma's... View Obituary & Service Information

The family of Velma Patricia Faust created this Life Tributes page to make it easy to share your memories.

Send flowers to the Faust family.