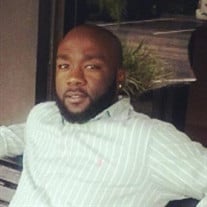 Van Darion was born on November 17, 1987 to Oliver Wilson and Belinda Y. Knox in Pahokee, FL. Van Darion was raised in Clewiston (Harlem) FL. He enjoyed his adolescent years as a rambunctious athletic soccer, baseball and football player. He attended the Broward County School System and after graduating from Plantation High School in 2006, he went on to study business at Valencia College. While attaining his degree, he developed many trade skills, most notably as a chef at many local restaurants. His most recent place of employment was TSI, as a transportation operator for the past 2 years. Throughout his varied career life, he was always known as a savvy negotiator and entrepreneur. Van Darion was a force of nature, determined to enjoy and live at his best for himself and his daughter. His family and friends meant more to him than anything else in the world, something he often mentioned. He was extremely proud of his daughter, Deyona Wilson, and always did his best to support her. Van Darion was a very special soul. He had an immense passion for life and was always a positive source in whatever group he was in. His family and friends will miss him more than words can say. Anyone who knew Van Darion knew that he was the most loving relative a family member could ask for. He is preceded in death by his grandparents, Mr. and Mrs. Elbert Allen Jr.; Aunt, Gleneva Allen; Uncle, Delvin Dwayne Hughes; and Godmother Sylvia Wrisper. He is survived by his beautiful, intelligent and devoted daughter, Deyona Nia Wilson; mother and stepfather, Belinda & Henry Knox; grandmother, Bettie Beacham Milwaukee WI; siblings, Van Rossi (Tampa FL) and Van Simone (Nashville TN; Mandillo aunts, Pamela (Clewiston), LaFondra Allen (Tampa), Johnelle Smith, Pamela Nash, and Deborah Malone (all of Milwaukee WI), Barbara Johnson (Jackson MS.), Shirley Moore (Chicago IL.; uncle, Elbert Allen Jr, (Fort Lauderdale); God-sisters, Mattrica Kennedy, Monique Greaves, Tekeyla Sparrow; and many closely knit cousins relatives and friends.

Van Darion was born on November 17, 1987 to Oliver Wilson and Belinda Y. Knox in Pahokee, FL. Van Darion was raised in Clewiston (Harlem) FL. He enjoyed his adolescent years as a rambunctious athletic soccer, baseball and football player. He... View Obituary & Service Information

The family of Van Darion Amen Wilson created this Life Tributes page to make it easy to share your memories.

Send flowers to the Wilson family.