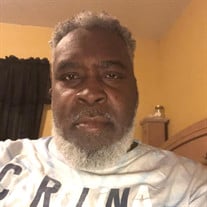 Tony LaPhill Peterson was born May 10, 1964 (Mother's Day) to the late Earma Lee Carey Peterson and the late Roosevelt Peterson Sr. in Orlando, Florida; And so began this great life. As a baby, Tony moved with his mother and family to Pittsburgh, PA.. As a young child Tony returned with his mother to Apopka, Florida where he attended the Orange County Public School System. Tony graduated from Apopka High School on June 19, 1982. Tony was a man of many talents. One of those talents was his passion for cooking! He worked at Chili's Restaurant, where he was Head Chef and retired as Head Training Chef. Tony could and would cook anything. He was a Master on the grill. Even to this day, at Porkies and Sonny's Barbeque Restaurants (Apopka) to see his face or at the mention of his name brings immediate smiles to his former co-workers. He will long be remembered for the "Grill Master" he was. Tony LOVED fishing and was a great "fisherman", as well as a great fisher of men. Mark 1:17 And Jesus said to them, "Follow me, and I will make you become fishers of men." Another talent Tony possessed, was a builder. He helped to build the homes in Lake Opal Subdivision; Even at an early age, Tony worked and worked hard. He mentored and coached numerous youth during football season. He was also known as the best "Candy Man" in town, was known for his jalapeño pickled eggs and the best "Push-Ups" you could find. On September 01, 2014, Tony married the dedicated love of his life, Kimberly Denise Howard. Tony insisted that all four of their children be a part of the wedding ceremony. He was adamant that September 01, 2014 was not just a day of uniting with his queen but they united as family. When asked by the hospital chaplain, "When God calls you home and you're standing before him, what will be your answer when asked; What is the one thing you accomplished in your life that you're most proud of?" Without hesitation and with an abundance of passion and pride, he answered: "My baby, My daughter." Serenity Arie will always be The apple of his eye and the beat of his heart. Tony loved the Lord and he loved awesome Worship. He was a dedicated member of New Direction Community of Faith Church. He served with the Men's Fellowship and was also a master on the grill for our Annual Church Barbeque. Tony is preceded in death by his mother: Earma; father: Roosevelt Sr.; one sister: Willie Ruth Sanford and one brother: Gary Peterson Tony leaves to cherish and continue honoring his memories: his loving and devoted wife: Kimberly Howard-Peterson (caretaker) and their four children: Arthur Cooper, Xavier Cooper, Charity Elizabeth Cooper and his most prized beloved: Serenity Arie Peterson. He also has a son: Tony Diamond Peterson. Two sisters: Sandy Smith and Virginia Jenkins both of Apopka, Fl.; Seven brothers: Roosevelt. Jr. (Renee) of Cleveland, Ohio; Leon Carey of New York, Alvin Peterson and Floyd Peterson (both of Pittsburgh, Pa.); Alviness Peterson (Yolanda) and Dale Reese(both of Apopka). The man he first introduced to his family as his brother, he was his Best friend and Best Man at his wedding: Chander "Dolph" Daniels (Jacqueline); Tony also leaves behind a host of nieces, nephews, cousins and sorrowing friends.

Tony LaPhill Peterson was born May 10, 1964 (Mother's Day) to the late Earma Lee Carey Peterson and the late Roosevelt Peterson Sr. in Orlando, Florida; And so began this great life. As a baby, Tony moved with his mother and family to Pittsburgh,... View Obituary & Service Information

The family of Tony LaPhil Peterson created this Life Tributes page to make it easy to share your memories.

Send flowers to the Peterson family.