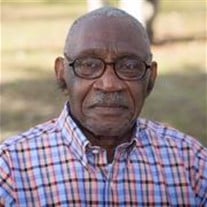 To view the service for Thomas Lee Edwards's live stream please use the link below: www.facebook.com/ZandersFuneralLIVE . Thomas Lee Edwards was born August 17, 1930 to parents Mr. and Mrs. Willie and Florine Edwards in Broxton, Georgia. The family later moved to Florida in 1934. Eventually the Edwards family planted their roots in Apopka, Florida, where Willie Edwards purchased land to build houses for each one of his children. Thomas was drafted into the United States Army where he served for two years. After being honorably discharged, he returned home and worked several odd jobs; which allowed Thomas to meet a lot of different people. As a matter of fact, he met and became really good friends with Douglas and Naomi Burrell. They liked Thomas so much, that Naomi introduced Thomas to her younger sister, Rosa. Thomas and Rosa only dated four months before Thomas asked Rosa to marry him. They exchanged marital vows on May 14, 1959. They built a solid foundation and made a loving home for their family. Thomas and Rosa were married 54 years before Rosa’s demise in 2013. In the mist of Thomas working odd jobs, he found his niche and began an apprenticeship as a tile contractor. He was a fast learner, which lead to him becoming a master of his craft. He was a very successful entrepreneur for over 41 years, providing services for the HOPS Bar and Grill Restaurants, several wing houses and many other businesses and residents. Thomas loved his church. He was a proud member of St. Paul A.M.E. Church in Apopka, Florida where he served many years as an active member. Thomas was preceded in death by his father, Willie Edwards; mother, Florine Edwards; wife, Rosa Edwards; son, Leslie Pierce, Sr., daughters: Deborah Edwards and Johanna Collins; brother, Mack Edwards and sister, Carrie Evans. Left to cherish his memory are his sons: Melvin Burrell of Apopka, Florida and Michael McKinney (Carla) of Ocoee, Florida; daughters: Minister Varnada Logan of Apopka, Florida and Michelle Nissenzone of Sanford, Florida; goddaughters: Earlene Owens of Brooklyn, New York and Sharon Thomas (Gary) of Orlando, Florida; 18 grandchildren, 41 great grandchildren; 7 great great grandchildren and a host of nieces, nephews, other loving relatives and friends.

To view the service for Thomas Lee Edwards's live stream please use the link below: www.facebook.com/ZandersFuneralLIVE . Thomas Lee Edwards was born August 17, 1930 to parents Mr. and Mrs. Willie and Florine Edwards in Broxton, Georgia. The... View Obituary & Service Information

The family of Thomas Lee Edwards created this Life Tributes page to make it easy to share your memories.

Send flowers to the Edwards family.