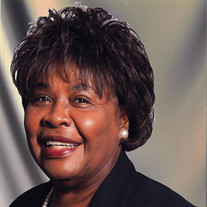 Dr. Shirley Temple Williams Sharpe-Terrell was born in Leesburg, Florida on September 17, 1947. She was one of eight children born to Genia Pearl and Roosevelt Williams, and was affectionately called “Sue Ann.” She was educated in the public schools of Lake County, Florida and graduated from Carver Heights High School in 1965. In high school, she was a member of the basketball and softball teams, and played the clarinet. Shirley’s firstborn son, Keith Rommonnè, was born shortly after she graduated high school. She received a Bachelors’ Degree in Business from Rollins College in Winter Park and a Doctor of Divinity Degree from J.D. Price Theological Bible College in Orlando. Shirley began her professional career with Florida Telephone Company in 1976. She was the first African American business representative in the Customer Service Department. Shirley excelled with the company, was frequently promoted, and eventually moved to company headquarters in Altamonte Springs . She met and married Paul Sharpe, a NASA Engineer, on June 25, 1977. To this union, two sons were born: Anthony Omar and Paul Augusta, and Shirley gained two bonus children (Larry and Claudette). Shirley and Paul lived in Center Hill, Florida. The newlyweds faithfully served in their local church. Paul became an ordained minister and Shirley began her spiritual journey to the renowned intercessory prayer warrior we all came to know and love. They were devoted to each other until Paul’s untimely death on March 3, 1983. After moving to Altamonte Springs for work and building a home in Apopka, Shirley met and married Robert Terrell on July 15, 1988. To this union Ryan Samuel was born, and Shirley gained three bonus children (Terry, Robbie and Tammy). Shirley and Robert divorced in 2008. Shirley transitioned to Orange County Government in 1998 and worked in Orange County Commission District 2 as an Aide to Commissioners Bob Sindler (1998-2006) and Fred Brummer (2006-2014), Shirley was known for selfless service and creating meaningful community programs. For example, she planned the first September 11 Memorial Program for District 2. And, in 2007, as a founding member of the Mayor’s Prayer Breakfast, she personally called every church in the Apopka directory to make her vision of the inaugural event a success. Fourteen years later, the Orange County Mayor’s Prayer Breakfast is Apopka’s largest annual gathering of Christians. Shirley had a warm and loving spirit and lived a faith-filled life that impacted constituents, family, friends, and strangers. Her many contributions to the community have been recognized by state dignitaries and community organizations, including, former Governor Bob Graham, the South Apopka Christian Ministerial Alliance (2010 Pillar Award), and at the Marvin C. Zanders Community Love Recognition Banquet (2015 Humanitarian Award). Shirley was an ordained minister, an author of a book on intercessory prayer (“Bridging the Gap”), an Elder at Experience Christian Center, and active member of the South Apopka Ministerial Alliance and the Orange County (FL) Alumnae Chapter of Delta Sigma Theta Sorority, Inc., among other organizations. She delighted in her eleven grandchildren and three greatgrandchildren. To these good and perfect gifts, she was known as Nana. Their Nana spoiled them with sweets, funny stories about their parents, and most of all, an abundance of unconditional love. Somehow, she had a way of making each one know that he or she was her “favorite. ”Shirley lived life beautifully, gracefully, and powerfully. She was a devoted Christian who committed her life to caring for others. Her home was literally an open door to those who needed shelter. It was not uncommon for Shirley to welcome recovering addicts, family members, and interns to live in her home. She was a woman after God’s own heart and an amazing example of how to love unconditionally. Shirley drew her last earthly breath and took her first heavenly breath on December 6, 2021. True to Proverbs 13:22, Shirley left an inheritance to her children’s children – a spiritual legacy, a Godly inheritance that will affect the lives of others for all eternity. Shirley was preceded in death by her father, Roosevelt Williams; mother, Genia Pearl; brother: Roosevelt Williams, Jr. and Willie Norris; sisters: Madgie Walker, Jewel Williams and Daisy Lynum. Cherishing her memory are her adoring sons: Keith Sharpe (Karusha) of Tallahassee, Florida, Anthony Omar Sharpe (Janet), Paul Sharpe, and Ryan Terrell, all of Apopka, Florida; bonus children: Larry Sharpe (Georgia) of Queens, New York, Claudette O’Conner (Rick) of Charlotte, North Carolina; Terry Benn (Sherry) of Stone Mountain, Georgia; Robert “Robbie” Terrell, III (Mona) of Clermont, Florida, and Tammy Miller of Apopka, Florida; grandchildren: Kacy (Jamel), Kerrah (Turean), Kassidy, Zion, Kamal, Sydni, Bryce, Kristin, Dylan, Paul, Keith and Shelby; great-grandchildren: Josiah, Khari, and Kai; siblings: JoAnn Reese of Leesburg, Florida, Minnie Adams (Larry) and MacArthur Williams, both of Orlando, Florida; godsons: Albert Green and Marques Rogers; and a host of cousins, nieces, nephews, sorors, friends, and spiritual children.

Dr. Shirley Temple Williams Sharpe-Terrell was born in Leesburg, Florida on September 17, 1947. She was one of eight children born to Genia Pearl and Roosevelt Williams, and was affectionately called &#8220;Sue Ann.&#8221; She was educated... View Obituary & Service Information

The family of Shirley Sharpe-Terrell created this Life Tributes page to make it easy to share your memories.

Send flowers to the Sharpe-Terrell family.