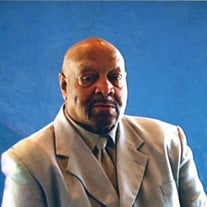 Mr. Rufus Humphrey, Sr. was born May 22, 1938 in Springfield, Ohio to Walter and Cora Humphrey. Of the surviving children Rudy and I were the youngest, we grew up in the house that our father built with his own two hands. When we were growing up Humpy, Harry and Earl who were the eldest of Cora and Walter’s children, was already married and had children of their own. This made Rudy and me very close. I often picked on Rudy about many things, one in particular was this old singer vacuum that once started, the bag would swell up and he would run and hide at the age of 3. I teased Rudy by calling him Dolly Jenkins, who was his child hood friend that wore a sugar bowl haircut. Rudy joined the Army at the age of 17, but had to bump his age up to the legal age of 18 to be admitted in. He followed the footsteps of one of our older brothers and became a paratrooper. A very good one I might add, which left me quite impressed. When Rudy left the Army he had buffed up and was very strong. He had matured as a man and was no longer picking fights. I have so many memories of my brother. I am so very happy I was able to see and speak with him for the last time on Christmas Day. I am deeply sadden by this lost. I am going to miss my brother whom I love deeply. Love You, From You Brother, Sherman Humphrey, Sr. On Thursday January 14, 2021, the Lord in His infinite wisdom deemed it timely to call our beloved Rufus Humphrey, Sr. to his eternal resting place. His departure is a deep and personal loss to his family and friends. He will be greatly missed by us all. Mr. Humphrey was preceded in death by his mother, Cora (Bright) Humphrey, father, Walter Humphrey; sisters, Helen Humphrey (King) and Catherine Humphrey (Curry); brothers, Harry Humphrey, Authur Humphrey, Earl Humphrey, Willard Humphrey, Millard Humphrey, Floyd Humphrey and Allen Humphrey. He leaves to mourn his life: his wife: Dianne Edwards; children: Scarlet Miller, Valerie Moore (Tioga), Sherri Smith (Wayne), Toieka Thomas, Sonja Martin (Charles), Crystal Anderson (Rodney), Rufus Humphrey, Jr., Permon Riggins (Contanya), Tacordon Riggins, Sr., Dion Weeks, Tacordon Riggins, Jr. and Tachiana Riggins; brother: Sherman Humphrey, Sr.; twenty-four grandchildren; nineteen great grandchildren; two great-great grandchildren; a host of nieces and nephews; cousins, other relatives and friends.

Mr. Rufus Humphrey, Sr. was born May 22, 1938 in Springfield, Ohio to Walter and Cora Humphrey. Of the surviving children Rudy and I were the youngest, we grew up in the house that our father built with his own two hands. When we were growing... View Obituary & Service Information

The family of Rufus Humphrey, Sr. created this Life Tributes page to make it easy to share your memories.

Send flowers to the Humphrey, family.