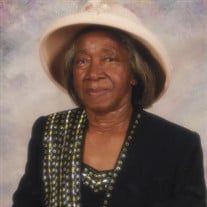 Executive Order in response to the COVID-19 Pandemic...we will only allow 10 individuals in at a time to enter the funeral home/cemetery. We must adhere to these guidelines so that we all can remain safe and secure during this crisis. Thank you for your understanding and cooperation Ruby Johnson was born on August 23, 1935 to parents Ms. Lula Rivers and Mr. Ruford Davis in Eufaula, Alabama (Barbour County). She was joined in Holy Matrimony to the late Mr. William H. Johnson on January 7, 1966 in Apopka, Florida where she resided until her demise. Ruby spent her early years in numerous farmworker roles until she answered her true calling as a caregiver and nursing assistant at Sunland Facilities in Orlando, FL until they closed their doors in 1983. She then continued her service at Fern Park Developmental Center as a training instructor before being promoted to House Manager. Her impeccable character earned her countless awards, plaques, and certificates of recognition over her 24 years of employment until she retired in April 2007. Ruby was an active member of the masonic family in Davis Chapter #36 Order of Eastern Star and Citronella Court #93, Heroines of Jericho. She was also a member of Z.A.P.T Elite, Inc. (Zellwood, Apopka, Plymouth, Tangerine), all of which lends a helping hand to the community. She finally settled down and made New Hope Missionary Baptist Church her church-home after retiring from work. She still continued to extend a helping hand to those in need, doing whatever needed to be done whenever she was called upon or saw the need. Her love for people extended beyond her family, her church and her friends. She befriended many people along the way with exemplary and genuine concern for humanity. Ruby was preceded in death by her parents, Ruford Davis and Lula Rivers; husband, William H. Johnson and son, Henry Davis. Left to cherish her precious memories are her sons: Charlie Davis of Atlanta, Georgia and Willie Johnson of Apopka, Florida; daughter, Lula Corns of Apopka, Florida; daughter-in-law, Bernice Davis of Wren, Georgia; brothers: Jimmie Sanders of Columbus, Georgia and Tommy Murray of Augusta, Georgia; sisters: Dorothy Florence, Helen Murray and Ernestine Brown, all of Augusta, Georgia; grandchildren: Sheretta Davis of Littleton, New Hampshire, Willie Brothers of Daytona Beach, Florida, Lequindre Davis (Sharika) of Plymouth, Florida, Kaitrondra Davis of Zellwood, Florida, Nicholas Glover of Orlando, Florida and Treyvon Fair of Apopka, Florida; Great Grandchildren: Zamaria Brothers, Jalen Brothers and Devante Brothers, all of St. George, South Carolina, Aziya Brothers of Las Vegas, Nevada, Aaliyah Brothers of Littleton, New Hampshire, Kevoni Davis of Plymouth, Florida, Artashia Davis of Zellwood, Florida, Nicaya Glover of Orlando, Florida, Nicholas Darnell Glover, Jr. and Nicaliegh Glover, both of Orlando, Florida; great-great grandchildren: J’Vonte Brothers of Las Vegas, Nevada and Zy’Mir Brothers of St. George, South Carolina; and a host of nieces, nephews, other loving relatives and friends.

The family of Ruby D. Johnson created this Life Tributes page to make it easy to share your memories.