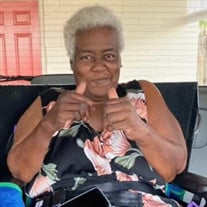 Rosa Lee Little was born on June 11, 1949, in Apopka, Florida to Otis Chance Sr. and Johnnie Mae Chance. She attended Phillis Wheatley until 1966. While attending there, she met her first and only true love, William Little. Ultimately, on August 19, 1968 they were joined in Holy Matrimony and in their union eight beautiful children were born. Rosa grew up as a Seventh Day Adventist in a home of strict believers in Christ Jesus. She was a member of the Seventh Day Adventist Church in Apopka, Florida, where she accepted Christ as her savior, at a young age. After spending her teenage years as Momma’s Right Hand, Friend and Interior Decorator, she assumed her new role of Wife and Mother with great ease, as she felt these were defining roles that exemplified who she was as a person and what she was called to do. She was an extremely loyal and loving Wife and an equally dedicated and protective Mother. Nothing gave her more pleasure than making sure that her family had a pristine home, daily cooked meals (great meals) and to the extent in which she could, their needs were met. She was truly a dedicated soldier on the front lines for her family and those in need. She went without on many days, to ensure that her eight children’s needs were met and on countless occasions, the needs of others as well. Rosa was truly the Epitome of Mathew 25:35-36 NIV. (35 For I was hungry and you gave me something to eat, I was thirsty and you gave me something to drink, I was a stranger and you invited me in, 36 I needed clothes and you clothed me, I was sick and you looked after me, I was in prison and you came to visit me.) Although for many years she gracefully assumed her role as a Dedicated Wife, Mother and Homemaker, she did eventually gather the courage needed to entrust her family into the care of others, while she enjoyed the self gratification of employment (Weyerhauser, Nursery Worker, Housekeeper and Quest Inc., Caregiver) and the opportunities they enabled her to share the beauty of who she was with her coworkers and make new friends. Unfortunately, due to her chronic episodes as a result of arthritis, she became disabled and gracefully resumed her dutiful call, as a Mother to all, Friend to many and Peace Maker when needed because as she would say, that’s how God wants us to be. To her children, She had a funny way of getting your attention. She wasn’t perfect, but she was Set Apart, she was Special, Precious, and undeniably Uncommon. She was her children’s first Bible Teacher, a strong disciplinarian, who took pride in teaching her girls, how to conduct themselves like a lady and her boys, how to be men. She taught her children how to love and to forgive like Christ. Rosa was so much more good than she was ever bad. She was and will always be an Awesome Imperfect Mother, that we would never trade for another. You will never be forgotten, you will always be our “Momma Rose”. Rosa was preceded in death by her Husband, William Little; Father, Otis Chance; Mother, Johnnie Mae Chance; Siblings: Amelia Chance, James Rosevelt Chance, Leroy Chance, Barbara Jean Gray, Otis Chance, Jr. and Mary Lee Walker. Left to cherish her precious memories are…Children: Kimberly L. Little of Orlando, Florida, Derrick J. Little (Ablavi) of Lawrenceville, Georgia, Eric T. Little (Monica) of Charlotte, North Carolina, Kevin P. Little (Tanesha) of Ocoee, Florida, Fieonda T. Little-Washington (Gerod) of Stafford, Virginia, Latasha A. Little (Jesse) of Orlando, Florida, William T. Little (Chika) of Garner, North Carolina, and Tiffany N. Little of Orlando, Florida; Siblings: Aaron Chance (Ethleen) of Orlando, Florida, Christine Brown (Willie) of Azalea Park, Florida, Michael Chance of Orlando, Florida and Charles Chance (Lillie) of Orlando, Florida; Brother-in-law, Clarence Hardy Gray (Vince) of Apopka, Florida; Sister-in-law: Mary Lucille Chance (Otis, Jr.); 18 Grandchildren and 5 Great Grandchildren; Special Nieces: Veronica Thomas, Monica Gray and Alicia Richmond; Special Friends: Essie Law and Paul Kendrick; and a host of Nieces, Nephews, Cousins, other loving relatives and friends.

Rosa Lee Little was born on June 11, 1949, in Apopka, Florida to Otis Chance Sr. and Johnnie Mae Chance. She attended Phillis Wheatley until 1966. While attending there, she met her first and only true love, William Little. Ultimately, on August... View Obituary & Service Information

The family of Rosa Lee Little created this Life Tributes page to make it easy to share your memories.

Send flowers to the Little family.