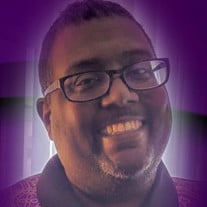 To view the Virtual Service please use the link below: https://us02web.zoom.us/j/87377154943?pwd=Vmk3ckMzZ2V6aUVmZmFUTnJjOTBNQT09 Robert Douglas Loftlin was born January 11, 1972 to the late Walter J. Loftlin and Quandora Loftlin. He was the youngest of four children. Bobby, as he was lovingly called by most, “Booge, Lubster, Lubby, and Junior” were the pet names he was called by members of the family. Robert was educated in the Philadelphia School District. He attended Roxbourgh High School where he proudly represented the Roxbourgh Indians as their mascot and player in both the football and baseball teams where he became known as Lubby. Robert attended Thaddeus Stevens Vocational School for a year. There he learned to make and create furniture and shelving. He used those skills to make a memorial flag box for his father’s military flag, presented to his family. Robert worked at various financial institutions which led him to continue his education, earning a Masters Degree from Almeda University in Business Administration with a Major in Finance Distinction. Robert grew up in a God loving and serving household. He attended Woodcrest United Church in Christ then transferred to Germantown Christian Assembly where he was baptized and became a member of various choirs. Robert used his smooth bass voice with the ability to hit various notes to allow his love of the Lord to shine through in song. He became a member of the Sunday School Board and served as Treasurer for several years. He was also part of the Drama Ministry where he developed his talent for acting. After leaving GCA, he joined Bethel Deliverance International Church and later transferred his membership to Bethel Camden where he was Deacon and Elder. He also used his anointed voice there as a part of the Praise and Worship Team. Upon moving to Florida, he and his wife worshiped at Change Lives Church where he served on the Praise and Worship Team. Bobby met and married his best friend, Tamara James on September 4, 2015. Tamara’s two sons, Julian and Corey adopted Bobby as their Dad, making him both honored and overjoyed because of the love and respect they showed him. Bobby had many hobbies, collections and creations. Being an excellent baker, he enjoyed making specialty cakes for different occasions. Partnering with his mom, they perfected her signature cake recipe. On November 18, 2000, he participated in “Philly’s Men Are Cookin 2000” in the Dessert Division. Bobby had many hobbies, one was collecting various Nut Crackers for Christmas. However, his greatest hobby began in his childhood, and that was his love for Star Wars. He collected figurines and items from every phase. Tammy shared and supported his love of Star Wars, by entering and winning a contest. She surprised Bobby at their wedding with a special guest appearance from Darth Vader and the Storm Troopers. He was elated! Recently, he added Baby Yoda to the collection. Bobby loved expressing his thoughts and feelings through words. This led him to write a play that was published as a book titled, “The Eve to Believe” in 2018. On July 8, 2021, Robert was ordained as a Minister. He received his certificate and his first and final order of service was, to perform counseling and the wedding ceremony of his son, Corey to Chasity. This assignment was both a blessing and an honor for him. Bobby was very meek, with few words to say but full of wisdom and knowledge, yet he had a unique sense of humor. He was known for coming up with nicknames and making them stick, especially for his wife, boys and nieces and nephews. He had a way of cracking jokes or saying something funny causing the room to fill with hard laughs while blaming someone else. Our earthly loss is heaven’s gain as Bobby reunites with his Grandparents, Dad, Uncles, Aunts, and oldest Brother, Jay. Bobby leaves his memory, love, legacy and hand-picked names for all to cherish: his Wife, Best Friend, and Loving Partner in Crime, Tamara; Cherished Sons: Charod, Julian, Corey and Ahmad; Daughter-in-love, Chasity; Loving and Nurturing Mother, Quandora Loftlin; Sister, Renee Laws; Big Brothers: Christopher Loftlin and Phillip Laws, Sr.; Sister-in-love: Brianni Blue-Loftlin, Wanda Chapman- Loftlin, Michele Norris, Stephany Cain and Jeanna Barnes Brothers-in-love: Michael Barnes and Barry Norris; Nieces/Daughters: Quanda Neely and Shannon Loftlin and Charisse Laws; Brother/Nephew, Phillip Laws II; Godson/Nephew, Thomas Laws; Nephew-in-love, Salathiel Neely II; Great Nieces, Imani Loftlin and Amour Kittrell-Laws; his bonus family, The Kays; Spiritual Broth- ers and Sisters: Orville Palmer (Regina) and Christopher Hunter (Stacey), Apostle Alphonso Dashiell and Rich Hill; and a host of aunts, uncles, nieces, nephews, cousins, extended family members, brothers and sisters in Christ, and the Forrest Avenue family.

To view the Virtual Service please use the link below: https://us02web.zoom.us/j/87377154943?pwd=Vmk3ckMzZ2V6aUVmZmFUTnJjOTBNQT09 Robert Douglas Loftlin was born January 11, 1972 to the late Walter J. Loftlin and Quandora Loftlin. He was the... View Obituary & Service Information

The family of Minister Robert Douglas Loftlin “Bobby” created this Life Tributes page to make it easy to share your memories.

To view the Virtual Service please use the link below: