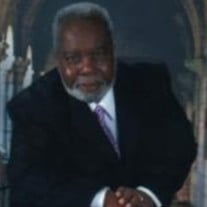 Reverend Robert L. Hires was born August 16, 1943, the second of four children born to David and Edith Hires who then resided in Live Oak, Florida. Later, the family moved to Orlando, Florida where Robert attended Holden Street Elementary School and Jones High School. He was saved at the age of 19 at Gorman Memorial Church of the Nazarene under the pastorate of Dr. Archie Williams. Shortly after being saved, Reverend Hires received his call to the ministry to preach the gospel of Jesus Christ. As he answered the call, he began his training at the Nazarene Training College in Institute, West Virginia under the leadership of Dr. R.W. Cunningham. In 1967, he accepted his first pastorate in Memphis, Tennessee where he served until 1974 under District Superintendent Dr. Warren Rogers, Sr. After serving faithfully in Memphis, Reverend Hires heard the voice of God instructing him to move back to Orlando. Although he did not know why he was moving back, he worked in the church assisting Pastor Archie Williams. Through his obedience, he soon met and married his wife Betty in May of 1975. Together they raised two sons, Curtis and Cedric Allen. In 1975, the Orlando Evangel Temple Church began in their living room and later moved to a storefront. They built the church located at 1531 Mercy Drive which is now called The Heart of Mercy, where Reverend William Andrews is pastor. Reverend Hires also attended United Bible College and Theological Seminary in Orlando and graduated with a Master’s Degree in Theology. The school conferred upon him an honorary Dr. of Divinity degree in 1985. Reverend Hires and Betty retired from Evangel Temple after 28 years of service in the community. The two of them shared a life of ministry and enjoyed spreading the gospel and the love of Jesus Christ everywhere they went. Everyone who came in contact with them experienced a lasting impression upon their lives. Although retired, Reverend Hires and Betty continued to serve at Union Park Church of the Nazarene where Reverend Dennis Jones is pastor. Reverend Hires had a wit that we all enjoyed. He had a way of being humorous and serious at the same time. He will be remembered as a man of character and integrity and was loved by many. Reverend Hires was one to speak truth in love whether you liked it or not. His words of truth demonstrated how much he loved you. Reverend Hires was preceded in death by his Parents: David and Edith Hires; Siblings: Herman Hires, Mavis Thompson and Deloris Williams. Reverend Hires leaves to cherish precious memories to: his Loving Wife of 46 years, Betty M. Hires of Orlando, Florida; two loving Sons: Curtis Allen (Davida) of Atlanta, Georgia and Cedrick Allen of Atlanta, Georgia; four Grandchildren: Evan, John, Jasmine and Kaliah. Also, he leaves to cherish his memories: 11 nieces and nephews; and a host of many other cousins, extended family members and friends.

The family of Rev. Robert Lee Hires created this Life Tributes page to make it easy to share your memories.

Send flowers to the Hires family.