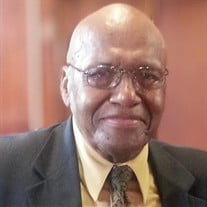 Reverend Andrew Carson departed this life at the age of 80 on November 13, 2020 at Grady Memorial Hospital, Atlanta, GA. Andrew was born in Reynolds, Georgia on September 19, 1940 to Mrs. Ina Lue Smith-Carson and Mr. Amos Carson, also of Reynolds, Georgia. He and his family then moved to make Winter Park, Florida their home, along with the five siblings that followed thereafter. Nurtured under Baptist Church tradition, as a child he and his siblings gathered every Sunday morning to recite a verse from the Bible, before attending service at Bethel Baptist Church, of Winter Park, where he later, in adulthood, had the opportunity to preach as a guest pastor. Andrew was also a highly skilled musician, mastering the trumpet at Hungerford High School, in historic Eatonville, Florida. One of his favorites was the “Flight of the Bumblebee.” After graduating from high school, Andrew sharpened his craft, with a full scholarship from Hungerford HS as a Music Major, earning the first trumpet seat at Tennessee State A & I University. To his misfortune, Uncle Sam came knocking and drafted him into the U.S. Army before graduating. He then served as a proud member of U.S. Army’s Construction Battalion in western Germany for a brief period. Some have since benefited from the building skills he acquired in the military. After a brief stint with an automotive battery company in Florida, Andrew made Atlanta his new home. Under the mentorship of the Reverend Doctor Arthur Carson, of Atlanta’s Springfield Missionary Baptist Church, Andrew put aside his training wings to become Pastor of St James Baptist Church, in Atlanta, until his passing in the year of its 13th Anniversary. Reverend Andrew Carson is survived by a daughter: Andrea Carson, and grandson: Jordan. Having also lost a brother, Dr. Charles Carson, in January of this year, he also leaves behind three other brothers and a sister: Loise Carson-Martin, Shaker Heights, Ohio, Reverend Al Carson of Orlando, Florida, Barry Carson, Orlando, Florida, Dr. Horace Carson, Waldorf, Maryland and numerous nephews, nieces, and cousins throughout Georgia and Florida. A Wake was held in Reverend Andrew Carson’s honor on Saturday, November 21, 2020 at Murray Brothers Funeral Home, Atlanta, GA.

The family of Rev. Andrew Carson created this Life Tributes page to make it easy to share your memories.

Reverend Andrew Carson departed this life at the age of 80 on...

Send flowers to the Carson family.