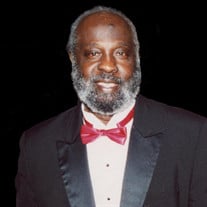 Life’s Reflections “To everything, there is a season, and a time to every purpose under the heaven.” Ecclesiastes 3:1 A Time To Be Born Ray Gilmore was the second of seven children born to the late Cleveland Gilmore and the late Veola Taylor Gilmore on September 2, 1940 in Honoraville, Alabama. His siblings were four sisters: Viola Tillman, Iola Hughley (deceased), Alma Peterson, and Edna Mott; and two brothers: Ernest Gilmore (deceased) and Rufus Gilmore (deceased). A Time To Live At an early age, with his family, Ray relocated to Apopka, Florida. He attended Orange County Public Schools. He was a resident of Apopka for over seventy years, where he built their home as the principal contractor and builder. Ray and Ella Jean moved into their home on July 4, 1975. A Time To Love Ray and Ella Jean met in 1964 and were married on September 16, 1967. To this union, they were blessed with two daughters: Dorcas Raejeana Gilmore (Chad) and Tabitha Raejeana Gilmore-Curtis (Kwame). They have two granddaughters: Kaelynn Ella Curtis and Carolyn Ella Gilmore-Harris. A Time To Labor, As It Is A Gift of God Ray was very talented, and over the course of his life, he was a barber, tailor, plumber, and entrepreneur. He attended and completed course work at Jacksonville Barber College and became a licensed barber. Ray later entered a plumbing apprenticeship program. He continued the course work to become a Master Plumber. He was employed with Harper Plumbing & Heating and retired from employment with Nash, Inc. He worked in the plumbing trade for over thirty years. He was also an entrepreneur with a barber shop and beauty salon, as well as a barbeque stand. He took extra pride in having the best ribs and homemade sauce. A Time To Every Purpose Under the Heavens Ray had a genuine love and concern for people. He demonstrated through his deeds an untiring commitment to improving the quality of life for those in his family and community. Ray accepted Christ as an adult and was a member of St. Matthews Holiness Church and St. Elizabeth Holiness Church. He was devoted to street ministry. He had a love and talent for ministry through music. He loved to play his harmonica. A Time To Die After an extended illness, on Thursday, January 21, 2021 at Advent Health Hospital in Winter Park, Florida with his wife, daughters, and nurse at his bedside, he was gently transformed to an eternal life of peace and joy. A Time To Mourn Cherished memories remain in our hearts since the transition to glory of our beloved one. The great legacy he has left for us to emulate includes his strong faith in God, servant’s heart, helping hand, and beautiful smile. Above all, he will be remembered for his love and commitment to serving others and strong belief in always doing his best work. These and other attributes shall always be treasured by his devoted wife of 53 years, Ella J. Bobb Gilmore, their daughters, Dorcas R. Gilmore (Chad), Baltimore, Maryland and Tabitha R. Gilmore-Curtis (Kwame), Orlando, Florida and their granddaughters, Kaelynn Ella Curtis and Carolyn Ella Gilmore-Harris; sisters Viola Tillman, Alma Peterson, and Edna Mott; sisters-in-law Rutha Wright and Berthenia Bobb; twin goddaughters Jeanine Washington and Jeanelle Washington Grimes and godson 1st Lt. Korian Brady; nephews, nieces, cousins, and a host of other relatives and friends.

Life&#8217;s Reflections &#8220;To everything, there is a season, and a time to every purpose under the heaven.&#8221; Ecclesiastes 3:1 A Time To Be Born Ray Gilmore was the second of seven children born to the late Cleveland Gilmore and the... View Obituary & Service Information

The family of Ray Gilmore created this Life Tributes page to make it easy to share your memories.

Life’s Reflections
“To everything, there is a season, and a time...

Send flowers to the Gilmore family.