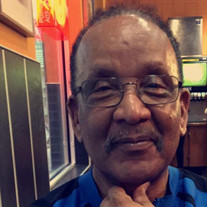 Randy Randolph Phillip was the fourth child of Edmund and Ada Phillip‟s eight children, and was born in the Ward of Siparia in the Republic of Trinidad and Tabago on Sunday, October 23, 1938. Randy became a Police Officer in the Trinidad and Tobago Police Service as a young man, where he learned and navigated the logistics and requirements which that life entailed. He subsequently transferred to the Mounted Branch Arm of the Police Service because he loved working with horses, and liked animals overall. His desire to do more with his life however prompted him to capitalize on an opportunity to emigrate to New York in the United States of America, where he achieved his engineering degree. He then secured a job on Wall Street at Merrill Lynch & Company, (a prominent investment firm), where he remained until his retirement. He and his family subsequently moved to Fort Lauderdale and later to Orlando, Florida. Randy liked cool to cold temperatures, and loved to wear short pants and short sleeved or armless tops where the weather was cooler. He liked the finer things in life such as nice food - he loved to cook and try out new recipes, he also liked nice cars, nice shoes, and most importantly nice clothes. He was a collector of all things musical including cassettes, records, compact disc, as well as the related stereo systems and accessories to play them on. In his quiet moments loved to listen and even dance to the music. He liked ornamental flowers and plants, and got great joy in planting and nurturing them to maturity. Randy had a great love for life and was always “the life of the party” and in socializing, when he arrived anywhere. If a party wasn‟t already going on, he created a party atmosphere. He also loved to surprise friends and family with unexpected visits and gifts. Randy was a hard worker who, when he committed himself to any endeavor would not deviate from it. Once he had made up his mind on what course of action he wanted to pursue in any situation, he would not change his mind and remained resolute, both in his personal and professional life. He loved the Lord and believed in doing whatever he could to stay safe and healthy, both physically and spiritual. He would often share a scripture or remedy to treat someone's problem, based on what he had been taught when he was young, or had learned over time. He did his best to take care of those he loved, lived life to the fullest and made no apologies for the choices he had made. He did it his way. Randy was preceded in death by his father, Edmund Phillip, mother, Ada Phillip, wife, Pearl Phillip, brothers, Aldwyn Phillip and Winston Phillip, sisters, Molly Reid, Patricia Prout, Pamela Phillip, and son, Derek Phillip. He leaves to cherish precious memories to, son: Ken Phillip; daughters, Arlean Phillip, Natalie Goodwin and Patrice Phillip; step-sons: Renice Copeland and Carver Gittens; step-daughters: Patricia Copeland-Maule and Karen Rajkumar; daughters-in-law: Debra Phillip and Mildred Phillip; son-in-law: Greg Goodwin; siblings: Oswald Phillip and Willis Phillip; grandchildren: Alexa Phillip, Zachary Miller, Jade Phillip, Jasmine Phillip, Serabi Goodwin, Leilani Goodwin, Mijori Goodwin, Renice Copeland, Jnr., Richard Copeland, Nicholas Henry, Ashli Gittens, Nyiessa Henry, David Gittens, Carver Gittens, Jnr., Charli Gittens and Aniyah Santory; great-grandchildren: Naomi Phillip, Dakota Phillip, Syrae Copeland, Kylan Copeland and Madisyn Ray, as well as many nieces, nephews, cousins, here in the united States of America, Great Britain, and the Republic of Trinidad and Tobago.

Randy Randolph Phillip was the fourth child of Edmund and Ada Phillip&#8223;s eight children, and was born in the Ward of Siparia in the Republic of Trinidad and Tabago on Sunday, October 23, 1938. Randy became a Police Officer in the Trinidad... View Obituary & Service Information

The family of Randy Raphael Phillip created this Life Tributes page to make it easy to share your memories.

Randy Randolph Phillip was the fourth child of Edmund and Ada...

Send flowers to the Phillip family.