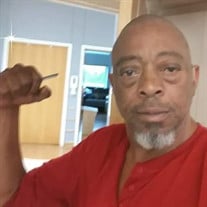 Percy Lee Riley was born on February 22, 1961 in Jackson, Mississippi to Jimmie Dale Allen and Billie Ruth Riley. He attended the Orange County Public Schools. Percy “Ole Skool” as he was affectionately called, was surrounded by family during his upbringing which included his grandparents, KP and Waldeen Riley, his aunts, Diane, Ida and Susie (Billie Jean). As a youth he and his family moved to Orlando and surrounding areas. Although Percy was hearing impaired, he let nothing and I mean nothing stop him from living a busy and spirited life. He had a passion to learn many trades and did them quiet well including cooking/grilling. You can say he ”burned” better than some women. Percy chose to settle down and on February 21, 2014, he married Tracy Osley of Philadelphia, Pennsylvania. He began his battle with pancreatic cancer in 2019 and with God’s help fought with dignity and fire. He was actively involved with opening his own Businesses. striping and waxing floors, lawn care service and of course “Grill Master”. He continued to be active with the things he loved until his illness caused him to scale back. He departed this life on October 31, 2020. He was preceded in death by his father, Jimmie Dale Allen, sister, Linda Carr, Aunt, Susie Lee Riley, cousins, Kathareon Riley and Norgilyn Riley and niece, Renee Rose. He leaves to cherish precious memories to his wife, Tracy Riley of Orlando, Florida; mother, Billie Ruth Wilson of Orlando, Florida; children, Melissa Vinson, Toledo, Ohio, Kimberly Scott, Justin Wilson, Mark Wilson and Randell Burton, all of Orlando, Florida, Trintavius Riley and Kinshasa Henderson both of Mississippi; siblings, Barbara Wilson and Shirley Wilson both of Orlando, Florida, Trina Allen and Steven Allen both of Saginaw, Michigan and Joyce Gammage of Orlando, Florida; nineteen grandchildren; a host of aunts, nieces, nephews, cousins, godmother, Dorothy Horne; godsister, Roselee Horne; godbrother: “Frog” Horne; other relatives and friends.

Percy Lee Riley was born on February 22, 1961 in Jackson, Mississippi to Jimmie Dale Allen and Billie Ruth Riley. He attended the Orange County Public Schools. Percy &#8220;Ole Skool&#8221; as he was affectionately called, was surrounded by... View Obituary & Service Information

The family of Percy Lee Riley created this Life Tributes page to make it easy to share your memories.

Send flowers to the Riley family.