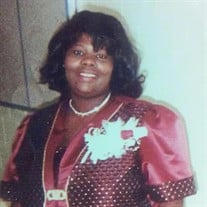 Oris Lynn Gordon-Payne was born May 13, 1964 in Brevard, Florida to parents, Dalton F. Gordon and the late Minnie Pearl Daughtery-Cooley. She attended Cherokee School of Orange County Public Schools. Oris Lynn was the proud mother of 10 children: 5 daughters and 5 sons. She also raised her niece (Antrunette) as her own following her sister’s transition to heaven. Oris worked and retired from National Linen Services which is where she met and married the love of her life, Christopher Payne, Sr. After retirement, she became a full time Mother and full time servant of the Most High God. She served faithfully. She enjoyed spending quality time with her children and grandchildren. The grandchildren would often remind her that “She was the best”! They wanted to be wherever she was! Studying the Word of God was her favorite thing to do daily. Evangelist Oris loved to preach and teach the Word on a weekly basis at church. Her favorite saying was, “I came to tell you just what JESUS said!” Cooking was a passion for her. She was an awesome cook! She made the best “dressing” and homemade sweet potato pies. A Time to Serve Evangelist Oris took great pride in attending to the needs of others; even if it meant putting herself last. She gave of herself unselfishly. She enjoyed feeding the homeless, serving in the mission field, and advocating for the ones who others had given up on. She was a woman of Great Faith. “Proverbs 31” A virtuous woman who feared the Lord. She accepted the Lord as her personal Savior at a very young age. She was a member of St. John Missionary Baptist Church of Orlando, Florida under the leadership of Reverend Dr. Fred L. Maxwell. She later joined the Progressive Freewill Holiness Church of God located in Apopka, Florida under the tutelage of the late Bishop James McFarley, Sr., where she was a faithful member for 30 plus years. Evangelist Oris served in various capacities. She was a member of the Clergy/Ministerial Staff and was an ordained Evangelist. She received her B.A (Born Again degree). She preached and edified with the gospel of Jesus Christ to all who came in contact with her. She was a mighty prayer warrior. Her favorite quotes she would often say were, “You can bail out of jail, but you can’t bail out of hell” and “Get your soul right!” She leaves to cherish her precious memories: Father, Mr. Dalton Gordon (Georgianna); Daughters: Karen “Trina” McFarley, Minnie Persaud, Pearl Persaud, Latoya Gordon, Mariah Payne; Niece, Antrunette Kirby; Sons: Morris Gordon, (Tyesha), Laronnie Gordon, Bryan Gordon, Christopher Gordon and Marcus Gordon; Stepsons: Christopher Payne, Jr. and Calvin Payne; Brothers: Larry Sadler, Anthony Gordon, Darrel Kirby (Roshanda), Stacy Kirby, Sr. (Sharon), David Gordon (Kim), Derrick Gordon, Dwayne Gordon (Akhimie) and Edward Cooley Jr.; Sisters: Vernita Cooley-Jones and Altonese Reese; Grandchildren: Jeremiah, Camya, Javaughn, Sharhonda, Myles, Jah’Kwez, JyMari, Camille, Ami and Jahzir; Spiritual Mother, Martha Newsome; Godmother, Joan Whitsett and a host of other loving relatives and friends.

The family of Oris Lynn Gordon Payne created this Life Tributes page to make it easy to share your memories.

Send flowers to the Payne family.