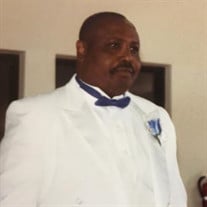 Deacon Nathaniel Shazier was born March 7, 1947 in Tallahassee, Florida to Lovett Shazier and Susie Mae (Barber) Shazier. At an early age, he attended school in Tallahassee, Florida (Leon County Public Schools). He later moved to Orlando, Florida and attended Orange County Public Schools. Deacon Shazier accepted Christ and became a faithful and dedicated member of Victory Praise Center Church of God in Christ. There he answered his calling as a deacon and served Christ for many years, while serving in numerous capacities throughout the church. Deacon Shazier worked over 15 years at the Bishop Office Furniture warehouse as a forklift driver. Deacon Shazier loved people and had a great passion to help others. He drove the Victory Praise Center Church of God in Christ church van for many years. He also drove for New Hope Ministries of Orlando where he dedicated his time to making sure everyone made it to church on time. He also loved to cook. After retiring in 1993, he opened his own business in 1994, “Nate’s Famous BBQ” where he remained opened until 1997. “Grandaddy Shazier” as he was affectionately known to his grands, loved and cherished his grandchildren and great grandchildren and was very proud of them. He has left his love, prayers and wisdom for each of them. Deacon Shazier was preceded in death by his parents: Lovett Shazier, Sr. and Susie May (Barber) Shazier; Brothers: Marucie Shazier and Lovett Shazier, Jr. and sister, Grace Shazier Williams. He leaves to cherish his precious memories to his son, Nathaniel Miller Shazier, Jr. (Katrina) of Orlando, Florida; 3 grandchildren: Nathaniel Miller Shazier III (Latoya) of Orangeburg, South Carolina, Amber Frasier (Dejan) of Ocoee, Florida and Carlie Shazier of Orlando, Florida; 6 great grandchildren: Damarcus Dewayne Croaker, Jr., Nathaniel Miller Shazier IV, Jakobe Jacion Frasier, Adrian Titus Durand Davis II, Princeton Jakai Frazier and Amiyah Tere Danielle Davis; special niece, Antonette Brown of Columbia, South Carolina; brothers: Robert Shazier of Miami, Florida and Dan Shazier (Brenda) of Orlando, Florida and a host of nieces, nephews, cousins and many sorrowing friends.

The family of Nathaniel Shazier, Sr. created this Life Tributes page to make it easy to share your memories.