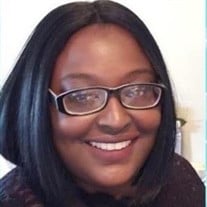 Natesha Lashawn Smith was born May 9, 1985 two minutes after her twin sister Latesha Deshawn Smith to Curtis Leon Smith and Linda Yvonne Jenkins-Smith in Kissimmee, Florida. She was the 3rd of five children (all girls). Natesha attended public school in Osceola County and graduated from Osceola High School in 2004. She attended Concord Institute and received her Degree in Massage Therapy. As a teenager she dated and fell in love with Frantz Rendel. Together they were the parents of three loving children. They remained together for sixteen years until the Lord decided to call her home. She received Jesus Christ as her Lord and Savior at a young age at Shiloh Missionary Baptist Church under the leadership of Pastor Remer Baker, Jr. She later joined Harvest Time Ministry and Worship Center under the leadership of her uncle Reverend Melvin L. Jenkins. Natesha was a loving and caring person that was a joy to be around. She had an enormous laugh and a warm and inviting smile. Some would call her a “social butterfly”, everyone she encountered she made feel welcomed. Natesha was involved in many activities, from girl’s scout to cheerleading to track & field and wrestling. She received a state championship ring for wrestling and holds the record for shot put at Osceola High School. Natesha was a devoted and loving fiancé and mother. Natesha began her employment at the Cheesecake Factory. She later gained employed at SeaWorld and as a Massage Therapist. Natesha also received her Real Estate License and worked under her cousin Tanya Phillips-Staples. Natesha later became an entrepreneur and started her very own business MG3 Artistry. Natesha lived a full and blessed life until the Lord sent His angels down to carry his loving child Natesha home on December 30, 2020. Her departure is a deep and personal loss to her family and friends, and she will be truly missed by them all. Natesha was preceded in death by her lovely mother, Linda Y. Jenkins-Smith, along with a host of aunts, uncles and cousins. She leaves in this life and awaits in another: her beloved Fiance: Frantz Rendel of Kissimmee, Florida; three precious daughters: Laniyah D. Rendel, Tiayna N. Rendel and Aaliyah L. Rendel, all of Kissimmee, Florida; her father: Curtis L. Smith of Kissimmee, Florida; four sisters: Tamika S. Smith, Latesha D. Smith, Curtisha C. Smith (Akeem) and Erin B. D. Smith, all of Kissimmee, Florida; two chosen sisters, Chantal B. Jenkins and Shanae M. Jenkins, both of Kissimmee, Florida; father-in-law: Gesner Rendel (Marie) of Orlando, Florida; mother-in-law: Erna Fortune of Kissimmee, Florida; three brothers-in-law: Donald Rendel, Badoni Rendel and Arry Rendel all of Orlando, Florida; seven sisters-in-law: Erline (Gav) St. Georges of Mexico, Mazelone Rendel, Vanessa Rendel, Cherry Rendel, Ketcheline Rendel, Kechena Rendel and Rosie Rendel, all of Orlando, Florida; two god children: Dreden J. Montgomery and Daylen K. Montgomery, both of Kissimmee, Florida; a host of aunts, uncles, nieces, nephew, cousins, other relatives and friends.

The family of Natesha Lashawn Smith created this Life Tributes page to make it easy to share your memories.