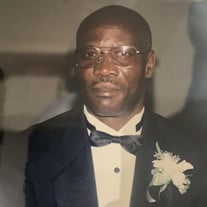 Milot Jean-Baptiste was born December 30, 1952 to Loristin Jean-Baptiste and Altagrace Jean-Pierre in Leogane, Haiti. On successfully immigrating to the United States in 1981, he later purchased a home and settled to live in Apopka, Florida... View Obituary & Service Information

The family of Milot Jean-Baptiste created this Life Tributes page to make it easy to share your memories.

Send flowers to the Jean-Baptiste family.