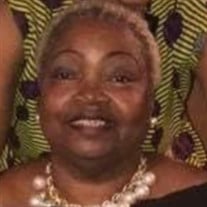 Maxine L. Sweeting was born on October 19, 1957 in Winter Garden, Florida to parents John Webb and Lela Munford. Maxine attended Orange County Public Schools, graduating from Lakeview High School, Winter Garden in the class of 1975. Years later she earned a certificate in Upholstery and Interior Decorating from Westside Tech (now Orange Technical College). She was well known for her love of interior decorating. Maxine later began a career at Manheim of Central Florida Auto Auction, where she was a Supervisor of Lot Operations for JRB and Associates. She retired in 2017. Maxine was beloved by all of her co-workers. Maxine’s Christian journey started at an early age from the Bethlehem Missionary Baptist Church under the leadership of the late Reverend F. E. Wilder, serving many years. Y ears later she joined New Inspiration Missionary Baptist Church, Reverend David Harp, Sr. There she served as a faithful choir member. Desiring to strengthen her relationship with Christ, she was led to Westside Family Worship Center, where Pastor Jean Payton was her leader. Building upon her foundation she began worshipping at Times of Refreshing Christian Worship Center under the tutelage of Pastor Sheila J. Spencer, where she grew in the Prophetic and Evangelism. It was at this time when she really began to blossom and her calling to “Give Your Heart to God Ministry” was birthed. Still growing and learning, she united with New Destiny Christian Center under the leadership of her beloved the late Pastor Zachary Timms Sr. Maxine was so moved by God’s Word that she invested many hours and resources visiting those in prison. It was during one of those Prison Ministry visits where she met her current leaders, Pastors Eric and Janet Melwani, of Church of Many Waters. Maxine was a faithful and devoted servant of God, where she served in many capacities. She was ordained as Associate Pastor on February 14, 2016. Maxine was a Pillar in the community of Winter Garden. She walked the streets interceding for all families. Her daily posts on Facebook encouraged many through dark times. She was affectionately known as “Ma or Ma Maxine” to those who came in contact with her. She will be remembered as a Beacon of Light in the hearts of the community. Maxine was a 3x cancer survivor, when she was declared cancer free in 2019. To God Be The Glory!! Maxine leaves to cherish precious memories with her Children: Latroxy Fournette (Earl) New Orleans, LA; Yantrika Jackson (Otha) Winter Garden, FL, Yoshay Sweeting, Melkiesta Sweeting, Orlando, FL; Brianne Flowers,Jalela Flowers, Orlando, FL; Siblings: Virgina Fleming, Rochester, NY; Gwendolyn Williams, Columbus, OH; Emma Hallaway (Reginald) Orlando, FL; 17 loving Grandchildren; 7 precious Great Grandchildren; Brother-in- law: Louise Kohliem a loving and devoted Nephew: Lashay Fleming; A host of Nieces, Nephews, Cousins, God children: Jamaurice Hall, Sharita Lucas, Danielle Miller, Chaille Dennis, Sherease Howard ; God Sisters: Marva Foster, Yvonne Schackleford, Jocelyn Smith; Special Friends: Vanessa P. Williams, Saint Fort Octave; many other sorrowing friends and the Winter Garden Community at large.

The family of Maxine L. Sweeting created this Life Tributes page to make it easy to share your memories.

Send flowers to the Sweeting family.