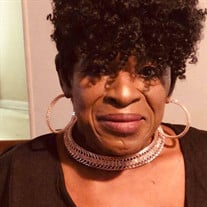 Mary C. Jackson passed away peacefully December 5, 2020. She was born March 1, 1952 in Winter Garden, FL to the late Albert Clark and Dora Jones. She graduated from Drew High School and was named the last Miss Drew High in June of 1970. In 1976 she married her love, the late Harry B. Jackson, who preceded her in death in 2004. She was a member of New Life Angel Church under the leadership of Pastor Lola Sams, where she served as an Outreach Coordinator. She served faithfully over 30 years. Most of all, she displayed the servant qualities of Christ as described in Matthew 25:35-40. Mary attended Valencia College where she received her Associates in Arts Degree. She then went on to attend the University of Central Florida where she received her Bachelor’s Degree in Psychology. Mary’s passion for learning and community service did not stop there. In 1984, she received her Master’s Degree in Criminal Justice from Rollins College. Mary was a devoted Community Leader and Philanthropist. She loved to “love and bless” people. Mary was an optimistic, strong-willed, and dynamic woman. She had the vision and ability to make things happen. She was given the name “Mary Action Jackson” as she was known for both her action and involvement. Mary was heavily committed to numerous community efforts and organizations. She humbly and fearlessly exemplified the likeness of Christ. Professionally, Mary was a respected and valued employee with Orange County Community Action and the State of Florida. She dedicated over 35 years to changing lives. Mary was the founder of the nonprofit organization “What A Friend Incorporated”. She fed the homeless, provided jobs, advocated for women that dealt with domestic violence, and also delinquent young men. She was also very active in the elderly community – constantly providing a source of help and hope. When Mary moved to her home in 1978, she was elected as the President of Colony Cove Homeowners Association. In addition to serving her immediate community, she was a key candidate for City of Orlando District 5 Commissioner position in 2002. Throughout the course of her life, she received many awards for both her philanthropic efforts and exemplary community service. Mary was preceded in death by her husband, Harry B. Jackson; parents: Albert Clark and Dora Jones; brothers: Willie Clark, David Clark, Gregory Clark, Bruce Clark; and sisters: Gwendolyn Gatewood and Cathy Clark. She leaves to cherish her precious memories: Daughters: Lunji Fountain (Alfred) and Kami Jackson (Jason Scott) of Orlando, Florida; Grandchildren, Demeche Sutton, Jacquavius Womack, Alfred Fountain, Jr. Anthonice Cunningham (Ezil Roberts), Amaya Fountain, Jason Scott, Jr., Jah’saiah Scott and Jayshawn Scott, all of Orlando, Florida; Brothers and Sisters: Albert Clark, Jr. of Savannah, Georgia, Gertie Lee Hunter and Reatha Mae Blige, both of Richmond Hill, Georgia, Willie Mae Rich, Carol Clark Ward (Willie),Titus Clark, Anthony Clark and Michael Clark, all of Winter Garden, Florida, Barbara Clark and Sheila Washington (Leo), both of Orlando, Florida; eight Great Grandchildren; and Special Niece, Sonja Phillips. She also leaves a host of loving and caring family members and friends.

Mary C. Jackson passed away peacefully December 5, 2020. She was born March 1, 1952 in Winter Garden, FL to the late Albert Clark and Dora Jones. She graduated from Drew High School and was named the last Miss Drew High in June of 1970. In 1976... View Obituary & Service Information

The family of Mary C. Jackson created this Life Tributes page to make it easy to share your memories.

Send flowers to the Jackson family.