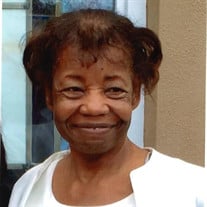 Mary Ellen Thompson was born on May 13, 1944 in Brooklyn, New York to proud parents Leon and Ruth Thompson. She was surrounded by her loving family. This also included her extended family such as her loving grandmother, caring Aunt Maybelle... View Obituary & Service Information

The family of Dr. Mary Ellen Bennett-Booker created this Life Tributes page to make it easy to share your memories.

Send flowers to the Bennett-Booker family.