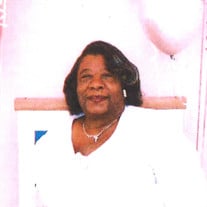 Mary Ann Hearns was born on April 12, 1935 to Elizabeth Brinson and George Hearns in Bascom, Florida; located in North-West Florida. She was educated in the public schools in Bascom, Florida. At an early age she joined Liberty Hill Baptist Church in Bascom, Florida. In later years, she uprooted and moved to Leesburg, Florida and became a longtime member for sixty years at Mt. Calvary Missionary Baptist Church in Leesburg, Florida, under the leadership of Reverend Dr. Tony C. Person, Sr. She served faithfully as a Deaconess for many years. Deaconess Mary Ann Adolphus was also known as a woman who kept the peace, loved her family, people, singing and a woman who never meet a stranger. She was a mother to all who knew her. She was married to T. E. Collins, and they together raised a loving daughter, Joyce Collins in Moultrie, Georgia. In later years she met and was united in Holy Matrimony to Rodrick Adolphus in Leesburg, Florida. Mary Ann worked for Leesburg General Hospital and Leesburg Regional Medical Center for many years. Mary Ann Adolphus started her own janitorial business and worked various businesses throughout the Lake County area, until her retirement. Mary Ann’s health began to fail, causing her to need support. Therefore, she became a resident at Lake Port Square Senior Living Community, in Leesburg, Florida for over ten years. She was named Ambassador because of her support and love for others. Mary Ann served as a Greeter, and welcomed people as they became new residents to Lake Port Square. Mary Ann taught bible study to all that wanted to attend. On this day, we come together as one family to celebrate the Home Going of a Prayer Warrior; who was called to her heavenly home on, Friday, June 3, 2022. She will “Forever Live in our Hearts.” She was preceded in death by her loving parents: Mother, Elizabeth Brinson and Father, George Hearns; Spouses: T. E. Collins and Rodrick Adolphus; Sisters: Estelle Williams, Jessie Mae Rowell, Betsy Gordon, Leana Hearns, Essie Mae Hearns and Vicki Hearns; and Brothers: John Paul Crutchfield, Jimmy Davis, Lee Hearns, and Elra “Bo” Hearns. She leaves to mourn her passing…her loving and devoted Daughter, Joyce George (JP) of Leesburg, Florida; Brothers: J.W. Bower of Leesburg, Florida, Herman Hearns of Tampa, Florida and Oscar Hearns of Tampa, Florida; Sisters: Betty Hearns of Tampa, Florida, Evelyn Jenkins of Tampa, Florida, and Oletta Hearns of Tampa, Florida; 5 Grandchildren, 18 Great Grandchildren, and 5 Great-great Grandchildren; and a host of nieces, nephews, cousins, extended family and friends.

Mary Ann Hearns was born on April 12, 1935 to Elizabeth Brinson and George Hearns in Bascom, Florida; located in North-West Florida. She was educated in the public schools in Bascom, Florida. At an early age she joined Liberty Hill Baptist Church... View Obituary & Service Information

The family of Mary Ann Adolphus created this Life Tributes page to make it easy to share your memories.

Send flowers to the Adolphus family.