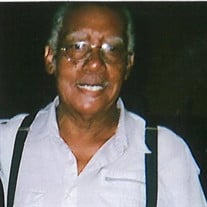 Executive Order in response to the COVID-19 Pandemic...we will only allow 10 individuals in at a time to enter the funeral home/cemetery. We must adhere to these guidelines so that we all can remain safe and secure during this crisis. Thank you for your understanding and cooperation Marvin Marion Mincy, Jr. was born on August 8, 1937 in Orange Bend, Florida to Laci Adams Mincy and Marvin M. Mincy, Sr. He was educated by The Lake County Training Center in his former years. As he got older he attended Carver Heights High School. Upon graduating, he relocated to Rochester, New York in 1956. As an independent teenager he obtained employment at Strong Memorial Hospital as an Orderly for 10 years. He then returned to Florida and obtained employment with Lenhart Electric as a Certified Electrician for an additional 15 years. Deciding to change occupations, he obtained employment at The Daily Commercial as a Mailroom Supervisor for 15 more years before retiring in 1999. Marvin enjoyed family life by talking frequent vacations to various destinations, telling humorous jokes with much laughter and listening to his “oldies but goodies” music. He was affectionately known by his nick name, “Preacher” given to him by his grandfather who recalled seeing him as a little boy in church shouting and clapping his hands, just praising the Lord. He stated, “The boy must gone be a preacher!” and it stuck with him ever since. Marvin was preceded in death by his wife of 44 years, Sherry Denell Williams Mincy; parents: Marvin M. Mincy, Sr. and Lacy Adams Mincy; sister, Agnes Mincy; brother, Johnnie Mincy; uncles Valentine Adams II, Rufus Pursley; and aunts: Ruth Adams and Agnes Adams Pursley. He leaves cherished memories to his children, two daughters: Lacey Ann Mincy of Rochester, New York and Maxie Harris (Albert); three sons: Jarvis Mincy (Jackie) of Tavares, Florida, Marcell Mincy and Kevin Mincy, both of Grand Island, Florida; a special devoted niece/daughter, Charisse Persley of Mt. Dora, Florida; brother, George Mincy (Elnetrice) of Leesburg, Florida; one sister-in-law, Barbara (Floyd) of Tavares, Florida; two brothers-in-laws: James Williams, Jr. (Emma) of Orlando, Florida and Lonnie L. Williams (Charlotte) of Tavares, Florida; six grandchildren: Gearge Martin (Nalina) of San Diego, California, Anefee Mincy of Fort Bragg, North Carolina, Daysha Mincy of Orlando, Florida, D’Shay Mincy of Grand Island, Florida, Saidah Varley of Clearwater, Florida; two nieces, Lavonda and Whitney Mincy, both of Leesburg, Florida; special cousins: Clarence Green, Donald Bisbee, Lillie Henderson, Leroy, Adams, Paulette Pace, Shirlene Starker and Valentine Adams; best friend and confidant, Lorenzo Wiliams, all of Ocala, Florida; and a host of cousins, other loving relatives and sorrowing friends.

The family of Marvin Marion Mincy, Jr. "Preacher" created this Life Tributes page to make it easy to share your memories.