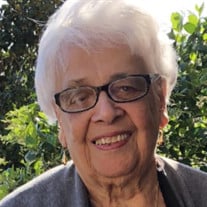 Flowers are welcomed or a contribution. If you wish to contribute, the family has requested that donations be given to the church. The church link is listed below. https://www.Christchurchlongwood.com/give Marjorie Grace Mais was born on July 3, 1930 in Kingston, Jamaica to parents Lucille Rebecca nee Clemetson Mein, and Leslie Mein. She was the second of three children. Her brother passed away shortly after birth and sister Marion Campbell preceded her in death, in 1987. Marjorie attended Alpha High School for Girls and upon graduation went on to secretarial school where she became very proficient in shorthand and typing. Marjorie had a career as a Health Administrator for The Ministry of Health and the Dental Auxiliary School in Kingston, Jamaica from which she retired in 1980. In the mid-fifties, she met Aston Lloyd Mais, a handsome man who happened to live next door with his Mother and Sisters. Love blossomed and on June 14, 1958 they were married. The union produced four children. After her sister’s death in 1987, she became a second mother to her nieces Sharon and Margaret. She was a loving and caring mother who ensured her children were always well cared for. Her family initially migrated to Orlando, Florida in 1978 while she remained in Jamaica to become eligible for retirement. In 1980, she joined her family in Orlando. The family eventually settled in Longwood, Florida. Now being a housewife, she had to learn to cook for the very first time in her life and after many trials, errors and many a burnt dinner, her oxtails became one of the most delicious meals you could have. Marjorie was a devout Christian and found her church home at Christ Episcopal Church where she served on the Altar Guild for many years and rarely missed a Sunday service until the Covid-19 pandemic. Marjorie also played an important part in the growth and nurturing of her grandchildren, grandnieces, and grandnephew. She had a special bond with each and every one of them, especially her first grandchild Farhaad. She fed and put him to bed after reading many bedtime stories, as both his parents worked nights for many years. She loved to dance Calypso and never missed an opportunity to “shake” those shoulders of hers and would often pull a grandchild into her arms and waltz around the room. She even brought in the 2021 New Year dancing with her children. Marjorie is survived by her four Children: Suzette Simpson (Richard), Michele Naghoon (Shapoor), Kerry-Ann Nugent (Robert), and Richard Mais( Laurie); Niece, Honorable Margaret A. Boyd (Jim), Grandchildren: Farhaad, Shana, Sean, Chad, Farzan, Kiana, Brittney, and Jordon; Grandnieces: Marissa (Syd), Brandi and Rachael (Erfan); Grandnephew, Brandon; Great-Granddaughters: Ari and Kiomi; GreatGrandnieces: Brooklyn and Ayla; and a host of relatives and friends. May you rest in eternal peace our dear beloved Mother, Aunt, Grandmother, Great-Grandmother, Grand and Great Aunt. We thank God for the blessing of having had you in our lives. Your passing has left a void that can never be filled, and you will live on in our hearts forever.

Flowers are welcomed or a contribution. If you wish to contribute, the family has requested that donations be given to the church. The church link is listed below. https://www.Christchurchlongwood.com/give Marjorie Grace Mais was born... View Obituary & Service Information

The family of Marjorie G. Mais created this Life Tributes page to make it easy to share your memories.

Flowers are welcomed or a contribution. If you wish to contribute,...

Send flowers to the Mais family.