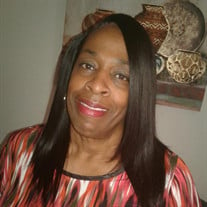 Marilyn Yvonne Holmes was born July 17, 1954, in Kissimmee, Florida to the proud parents of the late Mr. Hugh Holmes Sr. and Mrs. Ida Mae Holmes. She was the fourth born child to this union. She received her formal education from the Osceola County Public School System and was a 1972 graduate of Osceola High School. At an early age Marilyn became a member of Bethel AME Church in Kissimmee. When she became a teenager, she decided to change her membership and joined St. Luke Missionary Baptist Church. Marilyn was an avid bible scholar and reverenced the word of God throughout her Christian journey. Her love for God, family and others that she came in contact with was very special to her. She also was a member of Harvest Time Ministries and Sanctuary of Praise. She returned to St. Luke where she faithfully attended until her health began to decline. Marilyn was married to Collin Latimore and within than union was born two children; son, Terrence and daughter, O'neka. She was a very loving and nurturing mother. Both of her children were her favorites, and there wasn't anything that she felt that they wanted as well as needed, that Marilyn would not have provided for them. Marilyn Holmes was such a loving person who always considered the needs of others before her own. She displayed this in every aspect of her life. Marilyn possessed a positive love for life and for people. She would always greet you with a warm and pleasant smile. There is a saying “…give you the shirt off their backs”; this truly reflected her enormous self-sacrificing spirit. Marilyn worked at BellSouth for 30 years in two departments, as a directory assistant operator and in residential collections. After retiring Marilyn started her own company “I Got It Gifts”. The company was formed because of her love for God and always wanting to share His word with others. Marilyn had bible verses printed on t-shirts and hats. She authored and patented several booklets with biblical acronyms. However, her best work was her “Angel Wings” that she meticulously handmade and designed. This business was not designed for profit, but to encourage those who were feeling down hearted; thereby inspiring them to trust in God. Marilyn continued her burning desire to assist those in need. She studied and obtained her certificate as a Certified Nursing Assistant, and began working at Plantation Bay Rehab Center. Because Marilyn wanted to work more closely with patients she became an activities assistant. She found this position to be more rewarding as she was able to read to and with them, playing games, especially Bingo, being creative with arts and crafts in addition to playing the piano. Her love of neighbors extended way beyond Ginwright Court. She was a very talented and gifted seamstress. Marilyn also volunteered at “Give Kids the World”. This really touched her heart as she was able to assist so many families with ill loved ones. She considered this to be a special privilege as she showered them with her nice handcrafted gifts. She loved it! Marilyn was preceded in death by her father; Hugh Holmes Sr. and brother; Barry Holmes. Like apples of gold in silver carvings is a word spoken at the right time. (Proverbs 25:11). She leaves to cherish her memories: one son, Terrence (Alma) Latimore; one daughter, O’neka Latimore (Reshawn) Varnado, four grandchildren; Alexis Latimore, Camariah Starr Baxter, Jalen Latimore and Kadreah Varnado, a loving and devoted mother; Mrs. Ida Mae Holmes, two sisters; Sheila (Albert) Beville and Marjorie (Neville) Hinds, two brothers; Hugh (Betty) Holmes II and Christopher (Kathy) Holmes. Brother-in-laws, Thaddeus (Daisy) Lattimore, Theodore (Irma) Lattimore, Moses (Alice) Thomas and Sister-in-law; Jeanette Parker, a host of nieces and nephews, other relatives and friends. Special friends; Dorothy King and Bertha Markle, co-workers and life-long friends; Joyce Longley, Miriam Rodney and Elder Irene Simmons. “A good name is better than good oil and the day of death is better than the day of birth” (Ecclesiastes 7:1). She will be dearly missed, but we are comforted by the wonderful memories of her and all that she accomplished. Sister Holmes will be remembered for the wonderful name she made with God, Family, Friends and all those she cared for.

Marilyn Yvonne Holmes was born July 17, 1954, in Kissimmee, Florida to the proud parents of the late Mr. Hugh Holmes Sr. and Mrs. Ida Mae Holmes. She was the fourth born child to this union. She received her formal education from the Osceola... View Obituary & Service Information

The family of Marilyn Yvonne Holmes created this Life Tributes page to make it easy to share your memories.

Send flowers to the Holmes family.