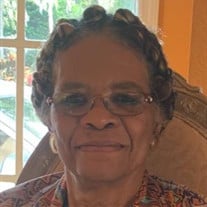 Malinda LaVon Lesesne departed this life February 9, 2021 in the solemnity of her home, leaving many loving family members and friends who mourn her absence. As you reflect upon wonderful memories of times with her, do listen to anything by Marvin Gaye in her honor. Reflections Though one’s demise is inevitable, LaVon’s departure was far more sudden and much too soon for all of us who loved her. For us, there were surely more laughs, meals, special moments to be shared and more throws to be crocheted but none were part of her life’s plan. For her, she was granted the peace and solemnity of transitioning from her own home. LaVon’s arrival on Easter Sunday, March 24, 1940, was the delight of her parents and Johnson Lesesne relatives. Her name Malinda, for her mother, and LaVon, chosen by her father, was soon somewhat discarded for “Baby Dumpling”, the name of a young character in a movie she and her parents had seen. Soon that nickname was shortened to “Baby Dump” or “Dump”, which to her aversion, stuck until this day. She enjoyed sharing the spotlight of growing up among the first Johnson and Lesesne grandchildren, her first cousins, her first friends on both sides of her family. Oftentimes, and with lots of laughter, LaVon fondly reminisced about their many antics as kids, as she also often did for her classmates and friends. As she blossomed into adolescence, her life as an only child was disrupted by the birth of a younger sister that idolized her. Kissimmee High School (1st - 12th Grades) was her community’s education source and she participated in many school-related activities, including playing trombone in the Marching Band. Trombone became LaVon’s instrument of choice after a conversation with her friend Chester who told her playing trombone was the hardest instrument to play, because you had to learn notes and positions. Hence the challenge and she needed to prove that girls could do and succeed at the same things as boys. Her KHS Class of ‘57 was special then and remained very close-knit even now, though there currently are only 4 survivors (Chester Barrington, Marvin Bradford, Ivy Griffin & Patricia Williams Richard). In fact, since childhood, both LaVon and Patricia continuously ribbed each other when Easter fell in the other’s birth month (March or April) and in the scheme of things and life’s changes, Easter occurs in April this year. Following high school graduation, LaVon completed Boston Clerical School, attended Tennessee A. & I. State University and graduated from Albany State College. She enjoyed living in Boston, Nashville, and Albany, but missed the warm climate of her beloved Florida. Upon graduation from Albany State, LaVon became an elementary school teacher in Orange (3rd Grade) and Polk (Pre-kindergarten and Kindergarten) Counties, retiring from the latter. She would also help in the family’s business as a driver for Buster’s Cab. However, LaVon’s greatest joy was being mother to Lisa (Herb) and grandmother to Harley and Kameron. She also had a penchant for family members Lare, Earl and Jonathan who spent special times with her as her bonus kids. LaVon treasured her decades of friendships and laughter with Millicent Chisolm O’Meally, Jean Hamilton (who recently preceded her in death), Virginia Wisener and Dolla Williams. One might have found LaVon quite reclusive, as she was often to herself, but if one ever rode with her in the taxi, ran into her at her favorite Ross Store, or places around town, she was always up for a good conversation. She lived her life in accordance with the Serenity Prayer and her parents’ wise words of advice. LaVon faced adversity head on and her standard response to life’s challenges was “One monkey never stopped the show...the show must go on”. The importance of family, whether near or far, immediate or extended, held great meaning for LaVon and she immensely appreciated and acknowledged the love received from family members via your many calls, texts, visits, delicious meals and gestured amid the restrictions of this corona virus pandemic. Throughout her lifetime, LaVon referred to whenever the moment her life here would be no more as “when I check out...” and requested that in her memory, Marvin Gaye’s music be played. LaVon checked out on her own terms and in her own way, Tuesday evening, February 9, 2021. Her forever special friend, Roswell Rooks, and a plethora of surviving family members and friends will forever cherish her memory. As you remember LaVon, listen to a tune by Marvin Gaye, they all were her favorites.

Malinda LaVon Lesesne departed this life February 9, 2021 in the solemnity of her home, leaving many loving family members and friends who mourn her absence. As you reflect upon wonderful memories of times with her, do listen to anything by... View Obituary & Service Information

The family of Malinda LaVon Lesesne created this Life Tributes page to make it easy to share your memories.

Send flowers to the Lesesne family.