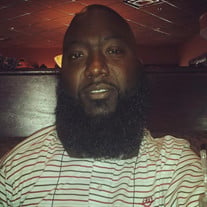 Malcolm M. Holman was born in Jacksonville, Florida on May 4, 1975 to William and Joyce Holman. His education started at Al Denson kindergarten in Jacksonville, Florida. His family relocated to Fayetteville, North Carolina, where he attended Ponderosa elementary and Irwin Middle School. He graduated from 71st high school in Fayetteville, North Carolina in 1993. On July 2, 1999, Malcolm and Catrina Collins Holman were united in holy matrimony. God allowed them to enjoy 25 years together with their children and grandson. Malcolm “Big Malc” enjoyed sports with his children. He played football, baseball, and basketball as a child and coached youth football as an adult. His loud voice and laughter could always be heard all over the field during practice and games. Malcolm loved driving trucks and buses. He was formally employed by Budweiser, Pepsi, and Coca Cola. He was currently employed at Walt Disney in the Transportation department in Orlando, Florida. Malcolm obeyed the Gospel in Jacksonville, Florida at the Northside Church of Christ in 2008. He worked with his dad in the ministry until he moved to Groveland, Florida in 2017. He continued his study and Christian walk at the Church of Christ at Ninth Street in Winter Garden, Florida. His life was fulfilled in knowing the truth. He was an extremely lovable, outgoing man that was able to talk to anyone. He would offer encouraging words and was straight forward with whatever he said. He had a strong handshake and his hugs were the best. He would light up a room with his booming voice and he loved to laugh. He adored his family and would do all that he could to make sure they were happy. He was an outstanding husband, father and provider. Malcolm raised his sons to be strong, determined young men and to always be courteous to others. Malcolm’s precious memories linger with his wife: Catrina Holman; three sons: Malcolm Holman Jr., Malik Holman and Dante Collins; grandson: Deucari Ferguson-Collins; father and mother: William and Joyce Holman; grandmother: Mary Sellers; great uncles: Culbert Williams and Frank Middleton; one sister: Ramona Holman, Jacksonville, Florida: two brothers: Sulieman Holman (Coreen) Clermont, Florida, Arkbar Holman (Julie) Boston, massachusetts; uncles: Samuel Holman (Lou), Victor Holman (Celestine), Anthony Middleton (Vickie), James Middleton; aunts: Phyllis Gregg, Tina Middleton, Gwendolyn Jones, Janice Holman, mother-in-law: Helen Henry and sister-in-law: Keisha Collins, one nephew: Xavier Holman, and four nieces, Jocelyn, Jada, and Eliana Holman and Makenzie Liles. As well as a host of cousins, other relatives and many friends from Germany, North Carolina, and Florida.

The family of Malcolm Mashard Holman, Sr. created this Life Tributes page to make it easy to share your memories.

Malcolm M. Holman was born in Jacksonville, Florida on May 4,...

Send flowers to the Holman, family.