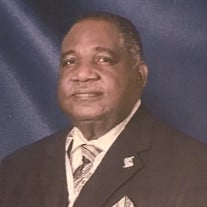 Lorenzo affectionately known as “Fat” was born on February 1, 1951 to the union of the late Eddie Hughley, Sr., and Bernice Hughley, in Apopka, Florida. He attended Phyllis Wheatley Elementary, Junior and Senior High and graduated with the class of 1969. Lorenzo was an avid and gifted athlete in football. As well as being a “talented athlete” he was an outstanding student academically. He completed most of his required courses a year early. Years later he served and work tirelessly with the “Phyllis Wheatley School Reunion” committee for several years as chair of various functions and promoting “School-Spirit”. After graduation, he matriculated at Valencia Community College in Orlando, Florida. He was employed at Sunland Training Center, Orlando prior to closing. He served as an officer with the Apopka Police Department for a short period of time. He was a truck driver for Dixie Lily Company until an injury resulted in him having to leave the workforce. He united with the Pleasant View Baptist Church at an early age under the tutelage of Reverend Zephaniah Turk. He was an active member, a devout Christian faithful to his calling. An exemplary doorkeeper where he served as the President of Usher Ministry No. 1, for many years. In fact, he served in many capacities. He was the Church Treasurer; Custodian, Former President of the Trustees Ministry; Former President of Men’s Ministry, Teacher of the Men’s Sunday School Class; and Vacation Bible School. On the local and state level, he was a great supporter of the Laymen’s Brotherhood Auxiliary of the Bethel Baptist Association. He was also an avid supporter of the Florida General Baptist Convention Laymen’s Auxiliary. He was known and loved by many in the community and surrounding areas and will be immensely missed. He strived daily to model a Christian life and as in the words penned in Hymn No. 454, “A Charge to Keep I Have” and “A God to Glorify”. He exemplified an unrelenting force of Agape Love, full of Grace. He believed that Christian Stewardship (in his own words) was “to take the things that God has blessed me with and apply it to my life, that I may better live and serve Him”. “Also sharing in love and kindness, both spiritual and material blessings with my brothers and sisters in Jesus Christ”. He loved the Lord and he loved his family abundantly. He sacrificed the pleasures of his life to meet the needs of those he cherished....never complaining! He is preceded in death by his father, Eddie Hughley, Sr., Sons: Rodney Hughley, Lorenzo Moody and Brother: Eddie Hughley, Jr. He leaves to cherish his memory, his adoring mother: Bernice Hughley of Apopka, Florida; son: Billy Hughley (Jamala) of Orlando, Florida; daughters: Tonya Oliver (Stevie) of Eustis, Florida and Chenelle Hughley of Mount Dora, Florida; grandchildren: Hyaleigh, Isaiah, Collin all of Mt. Dora, Florida, McKinley, Adriana, Adrian and Ivan all of Eustis, Florida; great-grandchild: Nova Roberts of Mt. Dora, Florida: brothers: Clifford Hughley (Jerene), Alton Hughley (Angela) all of Apopka, Florida and Kelvin Hughley (Torrey) of Kansas City, Kansas; one uncle; one aunt; a host of nieces, nephews, cousins, other relatives and many sorrowing friends.

Lorenzo affectionately known as &#8220;Fat&#8221; was born on February 1, 1951 to the union of the late Eddie Hughley, Sr., and Bernice Hughley, in Apopka, Florida. He attended Phyllis Wheatley Elementary, Junior and Senior High and graduated... View Obituary & Service Information

The family of Lorenzo Hughley created this Life Tributes page to make it easy to share your memories.

Lorenzo affectionately known as “Fat” was born on February 1,...

Send flowers to the Hughley family.