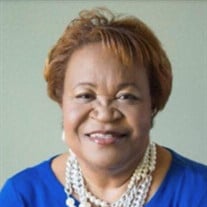 Linda was born on September 25, 1956 in Winter Garden, Fl to parents Lela Mumford and John Webb. She attended Maxey Elementary School, Lakeview High School and earned her high school diploma from Mid-Florida Tech. Her pursuit of knowledge and wisdom was unparalleled. Linda went on to earn a Paralegal certificate, Bachelor's degree in Criminal Justice, and a Master's Degree in Counseling. She worked in Education for 27 years for the Orange County Public School system in the classroom and facilitating student support. It was far more than a job for her. She took the time to not only educate her students but guide them through their struggles both in and out of the classroom. Even after her retirement, her Gotha Middle School Family still held a special place in her heart. At an early age she received Christ while a member of Bethlehem Missionary Baptist Church under the leadership of Rev. F.E. Wilder. Her Christian faith grew through the years as she was a steward of the Word. She became an ordained minister and assistant to the leadership of every ministry at which the Lord planted her. It was at Westside Family Worship Center where she learned to truly study the Word of God. Pastor Jean Payton helped Linda develop her foundation and exemplify true worship in every aspect of her life. She served at Faith Outreach Ministries under the leader of Pastor Charles and Clara Williams. She was a faithful member of New Destiny Christian Center under Pastor Zachery Timms. She then found a home at Rejoice in the Lord Ministries where Roderick Zak is the Pastor. At the time of her passing she was a member of New Day Christian Center under the tutelage of Pastors Vonn and Donna Robinson. In 2011 Linda was diagnosed with ovarian cancer. Even in the face of a grim diagnosis she fought hard and never wavered on God's ability to heal her. During her fight, her eldest son, Tory moved her to Illinois with his family to receive treatment at the Cancer Treatment Centers of America. The comprehensive care she received there inspired her to become more than just a patient and survivor. It became another aspect of her ministry as she was named an Ambassador of Hope for the Treatment Center. Linda was most at peace when surrounded by her family. She took every opportunity to support her children and grandchildren in their endeavors. Every holiday was an opportunity to dine and dance. Her doors were always open to counsel and assist not only her family but those indoctrinated into the fold attracted to her genuine love and care. Left to cheristh her memory are Husband Louis Kohliem, Children: Yete Payne (Lamar), Shanee Taylor, Tory Sr. (Angela), Danny Huey (Shant) Cornelius Taylor (Tryzel) Sharedra Dowe (Jerry), Siblings: Virginia Fleming of Rochester, NY, Maxine Sweeting of Winter Garden, FL, Gwendolyn Williams of Columbus, OH, Emmy Crowe Halloway (Reginald) of Orlando, FL, 21 Grandchildren, 11 Great grandchildren, nieces, nephews, God Mother Francis King, and other loving relatives and friends. On Saturday, January 16th Linda was called home to be with her Father surrounded by her children.

The family of Linda Renee Kohliem created this Life Tributes page to make it easy to share your memories.

Send flowers to the Kohliem family.