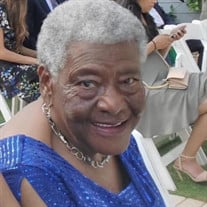 Lillian Eugenie Friday was born on January 22, 1931, to John Sebastian and Ellen Thomas on the Island of Barbuda. Lillian began her career as a teacher at Holy Trinity School in Barbuda. She later earned her RN and became a nurse-midwife. She served as the primary health provider on Barbuda until she was transferred to Antigua where she continued as a nurse-midwife and as a public health nurse in All Saints Village and later as a nurse at the Fiennes Institute. She moved to St. Thomas after her retirement, and went back to doing what she loved. She continued her illustrious nursing career at the Knud Hansen Memorial Hospital, now the Roy Lester Schneider Hospital in St. Thomas, US Virgin Islands. She was very active in her community and in her church. She served in many capacities at St. Luke's Episcopal Church on St. Thomas, including serving on the Vestry, Lay Eucharistic Minister, and as President of the Episcopal Church Women (ECW). Lillian Departed this life in Orlando while visiting her children, grandchildren, and great-grandchildren. All of whom gave her joy. Left to mourn her loss are her husband of 67 years, Clement Friday, Sr., her children, Jennifer of Georgia; Lilrose (Sydney) of Georgia, Clement Jr. (Janet) of New York, John (Pat) of Florida, Karen of Florida, and Gerard (Charmaine) of Bermuda, stepdaughter, Chantel (Ronald); sixteen grandchildren and eleven great grandchildren. She also leaves behind her aunt Renetta of Barbuda, her brother James of Antigua, and her sister Rebecca of St, Croix. She also leaved behind numerous cousins, especially the remaining two "L"s, Lydia and Lucinda, nieces, nephews, and a host of friends especially her lifetime friend Helena. She was preceded in death by her parents, son Nicholas, Sr., sister Launey, and her brother John. Celebrating a life well lived. May she Rest in Peace and Rise in Glory!

Lillian Eugenie Friday was born on January 22, 1931, to John Sebastian and Ellen Thomas on the Island of Barbuda. Lillian began her career as a teacher at Holy Trinity School in Barbuda. She later earned her RN and became a nurse-midwife. She... View Obituary & Service Information

The family of Lillian Eugenie Friday created this Life Tributes page to make it easy to share your memories.

Send flowers to the Friday family.