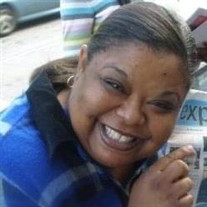 On October 1, 1965 a baby girl, LaShaurne Yvette (Fowler) Houseal was born to Johnnie Delores “Lois” Jackson and David Burl Fowler in Orlando, FL. She grew up in Maitland, raised by her mother and surrounded in love from her maternal grandparents, Etta and Johnny Jackson and other extended family members. At a young age, LaShaurne was baptized and became a member of St. Lawrence AME Church in Eatonville, FL. During her teenage years, she transferred her membership to Macedonia Missionary Baptist Church in Eatonville, FL, under the leadership of Pastor Willie C. Barnes. LaShaurne attended Hungerford Elementary, Maitland Middle School and subsequently graduated from Edgewater High School in Orlando in 1983. Everyone who knew LaShaurne knew that she always had a loving instinct for babies and toddlers and she would often be seen with other people’s children in tow. This passion was what shaped most of her post-high school working years as an Infant and Pre-K teacher in the daycare industry. Although she never had any children of her own, she nurtured and raised many children ranging from newborns to teenagers. Despite her young age, she was sometimes referred to as “The Grandmother of the Nursery.” She made friends easily with her infectious smile and charismatic personality. "Shaurne", “Heavy”, “Biggum”, “Shonny-boo” and “Thalia” were all names that those close to her knew her by. LaShaurne was a young spirit with an old soul. She was the life of the party and could “throw down” in the kitchen as well as anybody’s grandma! Some of her favorite times came from family gatherings where food was abundant and good memories were being made. At her time of transition, LaShaurne was single but had been married to Rodney Houseal from 1993-1996. To celebrate her life, LaShaurne is survived by her mother, Johnnie Delores “Lois” Jackson, four children she raised as her own: Shawanda Landry, Moneika Wilson, Jamaria Bellamy and Jaylen Scott, her siblings, Chassy Fowler, Mark Watts, Cornelius Bellamy (Sateria), Antonio Bellamy and Jameca Bellamy, her uncles, Apostle Alfonso Young (Gwen), aunts Evelyn Robinson and Alberta Williams, cousins, Laura Robinson, Victor Robinson, Anne Courtney, Lyn Vaughn (Gene), Antonia Paul and Cynthia Thomas, nieces and nephews, Chasity Bellamy, Cornelius “CJ” Bellamy, Jr, Clean Bellamy, Cierra Bellamy, Bianca Bellamy, Tiffany Bellamy, Autumn Bellamy, Garial Mahone, Garyeon Mahone, her Godmother, Louisteen Cummings, Godchildren Savion Kaye, Aaron Davis, Jr., DeVaughn Davis and Zi’ Amara “HoneyBee” Milorn, her best friend, Tamerra “Tammy” Davis (Aaron, Sr) and a host of other treasured family members and friends. She is preceded in death by her father, David Burl Fowler, her grandparents, Etta & Johnny Jackson, Anne Key and David B. Fowler, Sr., stepfathers James Bellamy and John Watts, aunts, Clara Jackson and Beulah R. Jones, two uncles, Gerald Key and Ben Williams.

On October 1, 1965 a baby girl, LaShaurne Yvette (Fowler) Houseal was born to Johnnie Delores &#8220;Lois&#8221; Jackson and David Burl Fowler in Orlando, FL. She grew up in Maitland, raised by her mother and surrounded in love from her maternal... View Obituary & Service Information

The family of LaShaurne Yvette Houseal created this Life Tributes page to make it easy to share your memories.

Send flowers to the Houseal family.