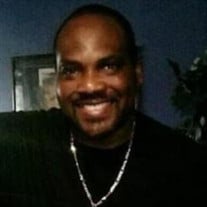 Larry Oliver Owens, Sr. was born May 29, 1960 in Orlando, Florida to parents, Tyrone and Vialethia Owens. He was the middle child amongst eight siblings. He graduated from Edgewater High School and later served in the Army Reserve in the Communications Department. Soon after, Larry excelled in careers at Orlando Regional Medical Center. There he served in several departments including Housekeeping, Recovery and Respiratory as an Equipment Technician where he also conducted trainings for interns. Larry attended Washington Park Church of God since childhood and served faithfully as a Deacon, Sunday school Teacher, and President of the Young Adult Choir. Larry was a loving father who believed in protecting and providing for his family. He was regarded as a great mentor and basketball coach by many. He truly loved spending time with his son playing basketball on weekends with the doctors and other employees. Larry was very resourceful with broad abilities in home renovations and product assembly, landscaping, interior decorating, cooking (earning him the name of “Chef Boyar- Dad”), skillful in playing pool, etc. He had a fascination with modern technology and always had a new gadget to show with every visit. His amazing life stories and funny sense of humor inspired many. He will forever be remembered as an amazing Father, loyal friend, the life of the party, and for his acts of kindness to others. Larry was preceded in death by his Father, Tyrone Owens, Sr.; Mother, Vialethia Owens; Brothers: Donald Owens and Dennis Owens. Left to cherish his memory are his Children: LaMeshia Owens (Eric) of Fruitland Park, Florida, Larry Owens, Jr. (Samantha) of Parkersburg, West Virginia, Jasmine Owens (Daren) of Apopka, Florida, Keyshawn Owens and Kesia Owens, both of Orlando, Florida; Siblings: Tyrone Owens, Jr. of Orlando, Florida, Ronald Owens (Gwen) of Lakeland, Florida, David Owens (Deloris) of Clermont, Florida, Michael Owens (Jennett) of Orlando, Florida, Kenneth Owens of Orlando, Florida and Ivey Gibson (Roland) of Orlando, Florida; Grandchildren: Jada Elyse, Cameron Washington, Jordyn Washington, Kamari Owens, Sage and Christian; and a host of nieces, nephews, other loving relatives and friends.

Larry Oliver Owens, Sr. was born May 29, 1960 in Orlando, Florida to parents, Tyrone and Vialethia Owens. He was the middle child amongst eight siblings. He graduated from Edgewater High School and later served in the Army Reserve in the Communications... View Obituary & Service Information

The family of Larry Oliver Owens, Sr. created this Life Tributes page to make it easy to share your memories.

Send flowers to the Owens, family.