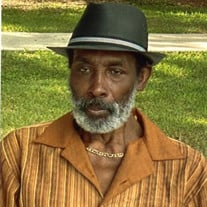 Lamar Harp, Sr. was born February 21, 1954 in Arlington, Georgia to Roosevelt and Louise Harp. He transitioned from earth on January 26, 2021. Lamar graduated from Lakeview High School the year of 1973, where he was a basketball star. Lamar... View Obituary & Service Information

The family of Lamar Harp, Sr. created this Life Tributes page to make it easy to share your memories.