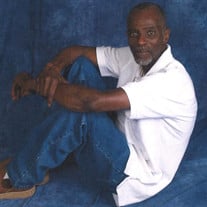 On Saturday, June 11th, 2022, at 11:00 AM (EST) To view the service for Kenneth McKnight's live stream please use the link below: www.facebook.com/ZandersFuneralLIVE Kenneth - The Beginning Kenneth McKnight was the fourth child born to Mr. Moses McKnight Jr. and Mrs. Delores P. (Pringle) McKnight on August 4, 1961, in Eatonville, Florida. Kenneth and his family were faithful members of St. Lawrence AME Church of Eatonville, Florida. Kenneth attended Hungerford Elementary school from first through sixth grade, Maitland Middle School from seventh grade to ninth grade and completed his last three years of High School at Edgewater High School in Orlando, Florida. Throughout his school years, Kenneth won many awards running track and achieved a “Black Belt” in Karate. Kenneth-The growing Phase After graduating from high school, Kenneth started working at Hubbard Construction as a heavy equipment operator. After many years of working in the heat and cold weather, he desired something better. He left Hubbard Construction and was hired at Winn-Dixie Warehouse as a selector for several years. He later became employed with Orange County Road and Drainage for about 10 years. Still desiring something even better, he obtained his CDL Class A license and became a Concrete Driver delivering concrete for Florida Rock Industries. Still not quite satisfied, Kenneth finally found his true calling becoming an over-the-road truck driver. He drove long haul for over 30 years. His last and final haul over the road was with RSB. Outside of work, he enjoyed repairing automobiles, and playing cards and other card games with family and friends. Most of all he loved watching his favorite NFL football team the Dallas Cowboys play. Kenneth-New Beginnings In 1990, Kenneth met and fell in love with his wife to be, Geanna Sullivan, at Mr. Lee's food store in Eatonville, Florida. On August 3, 1996, Kenneth McKnight and Geanna Sullivan were married and became one in the sight of God. They each brought one child into this union, Kenneth's first daughter, LaSharie Mcknight and Geanna's first daughter, the late Keanna Sullivan. In this union a son was born, Lorico Sullivan. They all loved Kenneth and he loved them. Thank God for this union of 25 years. The life and Leadership continues After the loss of his father in 2016, Kenneth was diagnosed with colon cancer. His faith in God and his determination were not going to let this disease keep him from doing the things he loved. Just like he dealt with every other experience in life, Kenneth managed his illness with strength, courage, bravery, and his faith in our Lord Jesus Christ never wavering from his beliefs. On Wednesday, June 1, 2022, at 11:18 a.m., on his final day, he completed his final over the road haul. He was surrounded by his loving family. At the age of 60, the Lord our God, Jesus Christ escorted Kenneth McKnight peacefully to his eternal home. Kenneth touched the lives of so many people and he was blessed with a large loving family whom he adored more than anything else in the world. His transition is a great loss to his family and those who knew him. He will be greatly missed by all. Kenneth was preceded in death by his father Moses McKnight Jr.; and daughter, Keanna Sullivan; father and mother-in-law: Franklin and Delores Clancy of Uniontown, Alabama. He leaves to cherish his memory his Wife: Geanna McKnight of Uniontown, Alabama, Daughter: LaSharie McKnight of Miami, Florida, Son: Lorico Sullivan Eatonville, Florida, Mother: Delores P. McKnight of Eatonville, Florida; Sisters: Lillie Ruth Ford of Eatonville, Florida, Mildred E. McKnight of Orlando, Florida, JoAnn P. Wilson (Levon) of Casselberry, Florida; and Jocinda Phillips (Leroy) of Winter Park, Florida; Brothers: Moses McKnight, III of Augusta, Georgia, Clayton E. McKnight of Titusville, Florida, and Kevin L. McKnight (Tasha) Deltona, Florida; Grandchildren: Jaylin Cecil and Travis Cecil, Jr., both of Miami, Florida; Neaveh T. Sullivan of Selma, Alabama; Aunts: Mable McKnight and Lucinda Johnson (James), both of Eatonville, Florida, Lillie Mae Harvin (Norman) of Columbia, South Carolina, Ophelia Thomas of New York, New York and Juliann Montgomery of Washington, D.C; Uncle: James Pringle (Daisy) of Baltimore, Maryland. RSB "Over the Road" Trucking Company Family: Marvin Stuart "Mabo"; Bud; Sugarbear; Thumper; Big Al; Top dog; High Dollar; Outlaw; Scooby-Doo; Eden. A host of nieces, nephews, cousins and special long time family and friends.

On Saturday, June 11th, 2022, at 11:00 AM (EST) To view the service for Kenneth McKnight's live stream please use the link below: www.facebook.com/ZandersFuneralLIVE Kenneth - The Beginning Kenneth McKnight was the fourth child born to Mr.... View Obituary & Service Information

The family of Kenneth McKnight created this Life Tributes page to make it easy to share your memories.

Send flowers to the McKnight family.