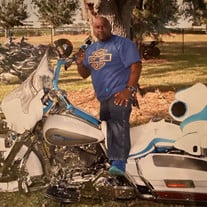 Kenneth Leon Martin, affectionately known as &#8220;Joe Friday&#8221; was born September 17, 1952 in Kissimmee, Florida to parents, Renell and Simon Martin, Sr. He was one of four children. Kenneth gave his life to the Lord, knowing he would... View Obituary & Service Information

The family of Kenneth Leon Martin created this Life Tributes page to make it easy to share your memories.

Send flowers to the Martin family.