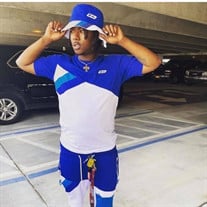 Kameron Jay-Hu Payne, affectionately known as" Kam", was born on December 17th, 1996 in Orlando, Florida to Kinah Hayes and Narkeith Payne, Sr. At an early age, he had a unique bond for people and was any and everybody's friend. He also loved... View Obituary & Service Information

The family of Kameron Jay-Hu Payne created this Life Tributes page to make it easy to share your memories.

Send flowers to the Payne family.