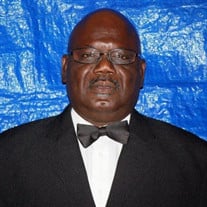 Coach Julius B. Gordon, Jr., affectionately known as “Coach“ and “Coach J.B.” was born November 4, 1949, in Zellwood, Florida to parents, Julius B. Gordon, Sr., and Katie M. Reynolds. Julius graduated from Hungerford High School in 1967 and matriculated on to FAMU in Tallahassee, Florida, and graduated in 1971. After graduating college, he became employed with the Orange County Public Schools and began teaching at Maynard Evans High School in Orlando, Florida. He was a dedicated educator and remained at Evans throughout his tenure of 38 ½ years. He loved education and sports. He spent his entire career building student-athletes and mentoring all who came in his path. Julius was a masonic member of the Most Worshipful Prince Hall Grand Lodge Ancient Free and Accepted Masons of Florida, Inc. He served faithfully in various orders and was a 33rd degree Mason. He was also a member of the Kappa Alpha Psi Fraternity. Julius was very loyal and faithful to anything with his name on it. He believed in having and keeping a good name. Anything he had his name on, he would be sure it was taken care and he saw it through until the end. Proverbs 22:1 – “A good name is to be chosen rather than great riches, loving favor rather than silver and gold.” He was a faithful member of the Independent House of Prayer in Zellwood, Florida for many years, under the leadership of his mother-in-law and founding Pastor, Dr. Mayetta Sexton, and currently under the leadership of Bishop Coy Wilson. Julius loved his wife and his family. He was a wonderful provider and protector of his family and friends. He was known to have his hand in everything and was very involved in the details of the lives of those he taught, knew, and loved. Although he would fuss, he would still do it. He was preceded in death by: Father, Julius B. Gordon, Sr.; Brothers: Alfonso Gordon and Robert Reynolds, Sr.; and Son, Julius B. Gordon, III. He leaves to cherish his memory: his loving Wife, Sandra Gordon; Mother, Katie Gordon; Sons: Sidney Silas, John Gallagher, Jr., Marcus Silas, and Derrick Gallagher; Daughters: Angela Harriet (Willie) and LaShawn Rose; Brothers: Jeffery Gordon and Miguel Gordon (Shirley); Sisters: Joann Latson (Lewis), Edith Chapman, Helen Gordon, and Laurene Gordon; many loving grandchildren and great-grandchildren; a host of nieces, nephews, cousins, aunts, uncles, and host of friends.

The family of Coach Julius Byrd Gordon, Jr. created this Life Tributes page to make it easy to share your memories.

Send flowers to the Gordon, family.