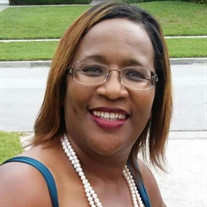 Juliette Evadne Walfall lovingly known as “Sister Juliette” was born to Cedric Palmer and Merlene Brown in Thornton, St. Elizabeth, Jamaica on July 3, 1962. She was raised primarily by her loving Grandparents, Mr. and Mrs. Hubert McNeil. Juliette experienced a normal childhood surrounded by extended family members. She graduated from Maggotty High School where she displayed a marked academic excellence. She grew up in a Christian home where regular church attendance was the norm. The family attended Thornton Baptist Church where Juliette accepted Christ as her personal savior at an early age. In furtherance of economic improvement, she relocated to the city of Montego Bay, where she met her future husband, Trevor Walfall. In 1984, she migrated to New York City to seek greater opportunities. Trevor followed a year later. Adjusting to the new society was challenging, yet she was determined to improve herself economically and otherwise. In a short while after, she and Trevor were joined in holy matrimony. The union produced three beautiful children: Samantha, Nicole and Lemuel. Juliette went on to earn a B.S. from St. John’s University in New York. Seeking greener pastures, she then worked for the New York City Health Department where she was promoted to Supervisor in the Birth and Death Records Department. She would eventually earn a master’s degree. Juliette became a member at the thriving Lighthouse Baptist Church, Brooklyn, under the stewardship of the dynamic Pastor Peter Greenidge. At Lighthouse Baptist she was an enthusiastic Counselor in the Camp Ministry. She was the driving force in the activities of the Conference of Church which is convened annually in Delaware. Her ebullient, positive and dynamic personality has endeared her to her family, co-workers, friends and church associates. Juliette and her family relocated to Apopka, Florida in 2005. She enthusiastically became a member of the Greater Faith World Center under the leadership of Pastors James and Alice Hicks. She continued to be a tireless, dependable and loyal worker in the church, especially in the Youth Department. Juliette was called to eternal rest on April 6, 2021. She leaves precious memories for her husband, Trevor Walfall, Sr.; Stepdaughter, Angela Walfall-Nelson; Stepson, Trevor Walfall, Jr.; Daughters: Samantha Walfall-Ortiz and Nicole Walfall Son, Lemuel Walfall. She also leaves behind: Grandchildren, Brothers, Sisters, and a host of extended family members.

The family of Juliette Evadne Walfall created this Life Tributes page to make it easy to share your memories.

Send flowers to the Walfall family.