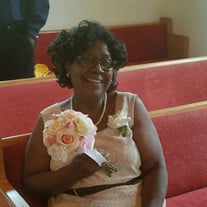 Julie L. Taylor was born July 24, 1955 in Oakland, Florida to parents James Wells and Mary Lee Robinson. She and her brother Gerald were raised by their maternal grandmother Ivory Lee Robinson. Julie graduated from Lakeview High School in 1973. It was in high school that she met her husband, Robert. The two married February 6, 1974 and of their union, seven children were born. Julie was a dedicated mother first and foremost. She treasured her children and was their biggest supporter. As a wife, she cared tirelessly for Robert. She was his helpmate and confidant. They enjoyed long drives and visits to parks. Julie attended floral school and worked as a florist for Publix before returning to the home. Julie was a woman of faith. A lifelong Christian, she did her best to be Christ like. She was an active member of Trinity Missionary Baptist Church where she served as a Deaconess and in many other capacities. She provided comfort to the sick by sending flowers to those she thought may have needed to be uplifted. As a florist, she was asked many times to make corsages and boutonnieres for events. Known as a soloist, Julie often rendered songs to comfort bereaved families and her children just for fun. Hearing happy birthday sung over the phone, was a special treat. Lately, she had begun texting a link to Stevie Wonder’s version, but it’s her version we will miss. Julie adored her grandchildren, Jasmen, Celeste, Katya, Diondria, Desean, Shyane, Robert “Tre”, Christina, Olivia, Braxton, Maliah, Camden and Harper. Julie was unpretentious. Julie was kind. Julie was loving. Julie was special. Julie was smart. Julie was love. Julie is LOVED. Julie was preceded in death by her father, James Wells; mother, Mary Lee Robinson; brother, Gerald Robinson; and grandmother, Ivory Lee Robinson. Left to cherish her memory are her husband, Robert Taylor, Sr., of Oakland, Florida; children: Lisa Drake (Daman) of Indianapolis, Indiana, Robert Taylor, Jr. (Miscindy) of Orlando, Florida, Tamara Shanel of Tampa, Florida, Darius Taylor (Lauren) of Bradenton, Florida, Travis Taylor of Jacksonville, Florida, Damarius Taylor of Oakland, Florida and Twyneisha Beaufort (Christopher) of Orlando, Florida; siblings: Denise Sharp (Kenney) of Camden, New Jersey, Pete Doughty (Sylvia) of Camden, New Jersey, Gwyn Doughty of Camden, New Jersey and Anthony Doughty of Camden, New Jersey; a bonus mother, Mary Wells of Camden, New Jersey; her brother’s children: Gerald Jermaine, Anthony Misty Bleu and Gerald Bennett Robinson; cousin, Ursula Walker as well; 13 grandchildren; 9 great grandchildren; bonus son, Derrick; as well as a host of other nieces, nephews and loved ones.

The family of Julie Taylor created this Life Tributes page to make it easy to share your memories.

Send flowers to the Taylor family.