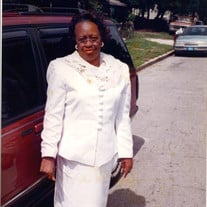 Juanita P. Carroll Pringle was born to the late Sadie Pearl Williams and Judge Haywood Carroll on March 29, 1940 in Henderson, North Carolina. She was later raised by her mother and stepfather, Onelee Johnson. After a few years later in life, she met and married her husband Lessie Pringle of Pinewood, South Carolina. Juanita gave her life to Christ at an early age while in Henderson, North Carolina. She later relocated to Eatonville, Florida and rededicated her life to Jesus Christ under the leadership of Bishop J. W. Freeman. Juanita became a faithful member of the Faith Center International under the leadership of Alexis and Barry Stephens where she served in many capacities, such as Mother Board. She attended church regularly until her health began to decline, but her faith in God never wavered. Juanita worked for the Seminole County School Board for many years. After leaving the School Board she continued to touch the lives of youth by becoming a Foster Grandparent for the Boys and Girls Club in Eatonville, Florida for 19 years. She was known as “grandma” to a plethora of life-long learners at the Club. Juanita loved to laugh and joke with family. She was a devoted Servant of God and Foster Grandparent who will be missed by those whose lives she touched. Juanita was preceded in death by her Mother, Sadie Pearl Carroll Johnson; Father, Judge Haywood Carroll and Husband, Lessie Pringle. She leaves to mourn: Brother, Johnny Hayward Carroll (Kojac) of Texas City, Texas; Brother-in-law, James Pringle of Baltimore, Maryland; Sisters-in-laws: Rosa Lee Carroll Samuels of Orlando, Florida, Joanne Pringle of Washington, DC, Mable Jones and Delores McKnight, both of Eatonville, Florida; Special Nephews: Terence Johnson (Jaqueline) and Johnnie Hayward Johnson, Jr. (Samantha); Niece, Sheila C. Carroll and a host of nieces, nephews, other loving relatives and cherished friends.

Juanita P. Carroll Pringle was born to the late Sadie Pearl Williams and Judge Haywood Carroll on March 29, 1940 in Henderson, North Carolina. She was later raised by her mother and stepfather, Onelee Johnson. After a few years later in life,... View Obituary & Service Information

The family of Juanita Carroll Pringle created this Life Tributes page to make it easy to share your memories.

Send flowers to the Pringle family.