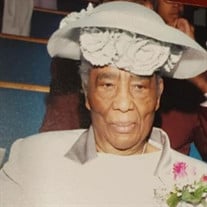 To view the service for Juanita Nelson Boyer's live stream please use the link below: www.facebook.com/ZandersFuneralLIVE Mother Juanita Alfreda Nelson Boyer departed this life surrounded by her close-knit family on December 5, 2020. She was born in the city of Eatonville to Mr. and Mrs. Isaac Nelson. From the time of her birth, Mother Boyer could probably be best described as “quiet power.” She and her younger sister, Corrine Nelson Montgomery, attended school in Eatonville and Juanita was a 1947 graduate of The Robert Hungerford Preparatory School. After graduation Juanita accepted a position as chef and house manager for a prominent Winter Park dentist, Dr. Bill Jennings. Working for the Jennings family was the only job Juanita ever had. After nearly a half century, she stepped away from the physical labor in 1996. February 15, 1952 was a day to remember for the Boyer family. It was the day that Clem Boyer and Juanita Nelson would become husband and wife in a solemn and religious ceremony. They were married 63 years before Clem’s death in 2017. The new Mrs. Boyer joined Clem’s family and made a lasting impression right away. Using her culinary skills, she took pride in making fancy dinners and using exquisite China for Clem’s family. She would do many small jobs to lighten the work load for Clem’s big family. After a few years of marriage, the Lord blessed the couple with a son whom they named Erik Nelson. Erik was the perfect addition to the family that had so much to offer. Erik would graduate as a scholar athlete from Edgewater High School in Orlando and attend Bethune Cookman University in Daytona Beach. Later he would enlist in the United States Navy where he excelled in many areas.Erik is married to the former Shannon Dunn and he is the father of four children: Britanny, Alexis, Erik, Jr. and Jeremiah. The grandchildren fondly called their grandmother, “Mema.” The Clem Boyers became known as extensive travelers and vacationers. Every summer they would visit a different state with their two dogs in tow. When they were not cruising to the Islands, they might have been flying to Alaska or Hawaii. Mother Boyer’s work in the church to this day remains unparalleled. For nearly 70 years, she was a consistent financial supporter and contributor. She was faithful: a church mother who assisted with communion duties and church dinners. Her favorite song was, “I Need Thee Every Hour.” Among her closest friends are Mother Leartis Bright, Mother Frances Sanders, Mother Jurlean Thompkins, and Mother Mag Walton. Mother Boyer lived a life that is to be emulated by the world. She fought a good fight; she finished her course, she kept the faith. Well Done-My Good and Faithful Servant! Included among those who will miss her smiling face are Erik, Shannon, Britanny, Alexis, Erik, Jr. and Jeremiah. Others who will miss the giant of a woman are her aunt, Mrs. Maylonna Lyes, and sisters-in-law: Dr. Minnie B. Woodruff, Dr. Edythe B. Jones, Mother Edna Boyer and Dr. Patricia Boyer. Many accomplished and loving nieces and nephews will miss her as well.

To view the service for Juanita Nelson Boyer's live stream please use the link below: www.facebook.com/ZandersFuneralLIVE Mother Juanita Alfreda Nelson Boyer departed this life surrounded by her close-knit family on December 5, 2020. She was... View Obituary & Service Information

The family of Juanita Nelson Boyer created this Life Tributes page to make it easy to share your memories.

Send flowers to the Boyer family.