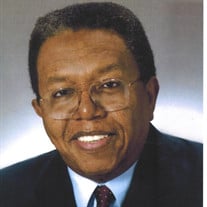 To view the service for Attorney Joseph Morrell Sr.'s live stream please use the link below: www.facebook.com/ZandersFuneralLIVE Joseph “Joe” Morrell, Sr., a distinguished member of the Central Florida community, passed away on November 5, 2020. He was a well loved man honored by his family and many friends and colleagues. Joe was born in Winter Park, FL on July 31, 1951. He graduated from Winter Park High School in 1969 and went on to attend Florida A&M University (“FAMU”). He majored in Political Science and graduated Magna Cum Laude in 1972, one year earlier than expected. Soon after, Joseph was admitted to the University of Florida College of Law, where he was awarded his Juris Doctor Degree in 1976 and admitted to the Florida Bar as an Attorney and Counselor of Law in 1977. Joe met his wife Gail, when they were seniors at FAMU. They fell deeply in love and were married in 1974 in Jacksonville, Florida. Soon after, they were blessed with a son, Joseph, Jr., in 1977. In 1980, Joe and Gail moved to Central Florida where Joe opened a private practice where he was able to help countless clients with their legal matters. Joe was well respected by the legal community as a fierce litigator with the utmost professionalism. He was known as a fighter, willing to take cases all the way to trial or pursue remedies at the Appellate level when necessary. In 1988, they were blessed with another son, Desmond, who followed his father’s footsteps and became an attorney. Joe loved having big family dinners during the holidays and he was a master on the BBQ grill. He had many wonderful years with Gail, Desmond, and Joey. They enjoyed great vacations both internationally and within the United States, and never missed family events or gatherings. Joe often said his greatest accomplishment was raising his sons. Joe had a very distinguished legal career. He practiced in the areas of Municipal Law, Criminal Law, Family Law, Probate, and Appellate Law. Over the years, he served hundreds of clients and he always represented them with zeal and excellence. One of his career highlights was serving as Eatonville’s Town Attorney for nearly 40 years. His professional resume includes: Former Assistant City Attorney-Jacksonville, FL Attorney for the Town of Eatonville, FL General Counsel Hungerford Trust Chairman of the Board, Greater Orlando Legal Aid Society Law Offices of Joseph Morrell, P.A. Joe’s professional involvement includes but is not limited to the following: The Florida Bar Former Vice-Chairman Criminal Law Section Orange County Bar Association Charter member of America Inns of Court #123 Former President of Paul C. Perkins Bar Association Former Board Member Criminal Defense Lawyers Association Member Orlando Committee For Selection of U.S. Magistrate His community involvement included: NAACP Orange County Former Chairman of Board Royal Palm Lodge #439 Former Board Member and Founding Member of 100 Black Men of Orlando Former Board Member of Ward Chapel, AME Church, Winter Park Former President FAMU Alumni Association Chairman of the Board for G.O.A.L.S. Masonic Lodge Member Kappa Alpha Psi Fraternity, Inc. Joe and Gail lived a full and happily married life for 46 years. They were blessed with two wonderful sons and three beautiful granddaughters who adored him. Joe was predeceased by his father, Ben Morrell; mother, Annie Mae Thompson, sisters Mary King (King) and Annie Mae Ray (Roy), and brothers: Robert Thompson (Genelle) and Ben Morall. He is survived by his wife, Gail Morrell; sons: Joseph Morrell, Jr., Desmond Morrell (Paula); granddaughters: Ella Morrell, Olivia Morrell and Liliana Morrell. He also leaves behind his three sisters: Betty Brown, Rosalie Pitts and Enid Laverne Peterson; brother, Paul Morrell; his mother-in-law, Georgia C. Witsell, sisters-in-law: Patti Moore and Debra Council (Wayne); brothers-in-law: Harold Witsell (Tyra) and Anthony Witsell (Cynthia). In addition, Joe leaves a host of cousins, loving nieces and nephews, grandnieces and nephews, and many life-long friends. His family lovingly leaves him in the blessed hands of our savior, Jesus Christ, and his memory will always remain in ‘his’ special place in Gail’s heart.

To view the service for Attorney Joseph Morrell Sr.'s live stream please use the link below: www.facebook.com/ZandersFuneralLIVE Joseph &#8220;Joe&#8221; Morrell, Sr., a distinguished member of the Central Florida community, passed away on... View Obituary & Service Information

The family of Attorney Joseph Morrell, Sr. created this Life Tributes page to make it easy to share your memories.

Send flowers to the Morrell, family.