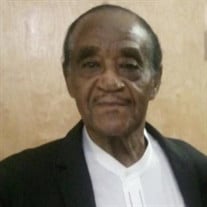 Joseph Hunter Jr. (also known as Joe, Daddy, Duddie, Jr, or Hunter to family), was born on April 8, 1932 to the late Joseph and Elizabeth Hunter in the city of Guyton in Effingham County, Georgia. He was the middle son sandwiched between two older sisters, (Ruby) & (Ruth, deceased), a younger brother (Boykin, deceased), and two younger sisters (Marie & Doris Jean, deceased). In his early life he attended and graduated from Effingham County Training school, and Beach High School in Savannah, Georgia. During his formative years he spent a great deal of time working on the family farm with his father. After transitioning from high school, he knew it was the desire of his parents that he make the farm his way of life, however he had other dreams that would include leaving the South. On a sunny day in Savannah Georgia, a cousin of Joseph introduced him to a young woman by the name of Gloria. He was intrigued and a romance developed. After a short courtship and with the permission from her parents, Joseph and Gloria were married on January 25, 1951. Shortly after they wed, PFC (T) Joseph Hunter was inducted into the United States Armed Forces serving 2 years active duty, and then transferred to the Army Reserve to complete a total of 8 years of service for his country. While Joseph was serving in the Armed Forces in Ft Hood, Texas, his first child, a daughter, Cynthia Yvonne was born. Upon his discharge from military service the family had a brief stay in Florida and then returned back to Savannah, Ga. It was here a second daughter, Wanda Elaine, was born. Under the Universal Military Training and Service Act, Joseph was able to achieve vocational training in masonry After completion of his training, Joseph filled his days with working in the construction business and caring for his family. It was during this time his first son, Avron Eugene was born. Joseph and his wife Gloria came from families that had strong beliefs in God, he a Baptist, and she Methodist. Joseph had a beautiful tenor voice, he used it singing with a travelling quartette throughout the metropolitan areas with his brother Boykin and other friends. Although Gloria supported his talent and service to others, her desire to have him more at home than on the road took priority. It was Gloria who attended a summer tent meeting and heard Pastor Harold Cleveland preaching the Advent message. In her excitement she invited her husband to the meetings and at the end of the effort they both were baptized into the Seventh Day Adventist Church. Soon after, the family moved to New York for a better work advantage where Joseph skills landed him a position with a large construction company, eventually becoming a Forman. Gloria was expecting their 4th child, and another son, Darryl Glen was born into the family Joseph Hunter Jr. Joseph moved his family into their first owned home in Queens, NY. It was here that he and Gloria joined the Linden Blvd (AKA Linden) SDA church. There he served as a Sabbath School Teacher and Elder. It was his melodious tenor voice that blessed many souls, and he used it singing with Walter Artis and the Artistic Chants quartette, the Fordamaires', Choralaires', and Lindennaire choral groups. He was the lead soloist when the Fordamaire choral recorded their first Album. Joseph was also an avid reader with o thirst for knowledge, reading the bible several times through each year. He also was an enthusiast searching theories of conspiracy and comparing them with the spirit of Prophecy writings. The entire family knew him for sharing long discussions on what he learned. In 1993 Joseph made the decision to retire and he and Gloria left New York and moved to Springhill, Fl. They first became active members o the Springhill SDA church, and then the Mount Calvary church in Tampa, Fl. In 2009 Joseph and Gloria were saddened by the loss of their eldest son Avron Eugene, however took solace in knowing that he was resting from a long battle with Diabetes. In 2013 the untimely death of their youngest son left them heartbroken. Although they mourned the loss of their two sons the bond with their two daughters was strengthened. In 2014 at the request of both daughters, Joseph and Gloria relocated from Springhill to Apopka Fl and joined the Mount Olive SDA church. It was here Gloria began experiencing illness, and in 2015 she lost her battle with life. Joseph was heartbroken over losing his wife after 63 years of marriage. With the help of his family, he tried to move past the void in his life. He enjoyed participating in the lively discussions in Sabbath School, and also attended several of the Seniors function. On February 9, life took a sudden turn and the loving father, grandfather, and friend known as Joseph closed his eyes for a final rest. With his wife and two sons preceding him in death he leaves to mourn two daughters, Cynthia (Pastor Carl), and Wanda (Everton); two daughter-in-law's, Delzora (Darryl Sr deceased), Carolyn (Phillip); one sister, Ruby Wilson; two sister-in-law's, Linda Williams, Doris Hunter; one brother-in-law, Harold Scruggs (Evelyn); Grandchildren; Wannde (Calvin), Tanya, Carl Jr (Michelle), A'njanene, (Duane), Avron Jr., Justin (Karin), Darryl Jr (Monica), Dominique, Derrell (LeAnn), and Dannae; Great-grandchildren; JeWan, A'jenae, Jeneice, Airyannah, lyanna, Brianna, Julian, Joelle, Aidyn, Michael, Jaydarian, Roman, Kieve, and Aniyah; a host of nieces, nephews, cousins, aunt, uncle, spiritual daughter and sons, church family, and friends. Rest in peace Dad, we shall meet you on that great getting up morning... .

Joseph Hunter Jr. (also known as Joe, Daddy, Duddie, Jr, or Hunter to family), was born on April 8, 1932 to the late Joseph and Elizabeth Hunter in the city of Guyton in Effingham County, Georgia. He was the middle son sandwiched between two... View Obituary & Service Information

The family of Joseph Hunter Jr. created this Life Tributes page to make it easy to share your memories.

Send flowers to the Hunter family.