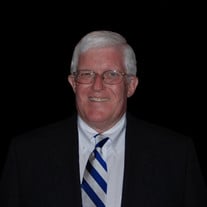 To view the service for Major John Shirley Fowler's live stream please use the link below: www.facebook.com/ZandersFuneralLIVE John Fowler was born on August 14, 1942 in Birmingham, AL to parents E. O. "Jack" Fowler and Ida Shirley Fowler. He graduated from Ensley High School and Howard College (now Samford University). John was a proud member of Sigma Nu fraternity. Anyone who spent more than 10 minutes with John heard about the fond memories he accumulated during his college years. John retired from the US Army Reserve as a Major and was an insurance bondsman for nearly 50 years before retiring at age 74. He worked hard but always enjoyed life and liked to have fun. An avid Florida Gator fan, John dubbed himself the “Ala-gator,” which meant he was the Alabama raised Florida Gator fan. He was legendary in his family for his mischief, mayhem, musical talent, sense of humor, loquaciousness, and (above all else) his steadfast commitment to his wife Jackie, his family, and Christ Jesus. John was a member of First Baptist Church of Sweetwater for more than 30 years and thanked the Lord before every meal he ever sat down to eat (and we all know that was a LOT of prayers). When asked what his definition of success was and what his life's greatest accomplishment was, John answered "Jackie" to both questions. Undoubtedly, John adored spending time with his beautiful bride of more than 50 years, Jacqueline Bragg Fowler enjoying the wonderful life they built together. John passionately loved doo-wop, rhythm and blues, and beach music. He amassed a vast collection of albums and compact disks. He especially loved music with the organ and brass. He had an extraordinary gift of playing the piano and organ by ear, and when visiting his South Carolina cousins as a youth, he frequently entertained them with his playing, much to their delight. A highlight of his life was serving as guest organist for Rock and Roll Hall of Famer, Big Joe Turner once in a nightclub in Birmingham. The significance of his love of music is exhibited by the fact that he passed away coincidentally while his all time favorite, Ray Charles, sang “Georgia on my Mind.” When asked by his granddaughter Jennifer what kind of end of life service he wished to have, John shared that he wanted a celebration of life that included a New Orleans style funeral march. So, an upbeat, New Orleans style celebration of the great life John Fowler lived is what he will get.

The family of Major John Shirley Fowler created this Life Tributes page to make it easy to share your memories.

Send flowers to the Fowler family.