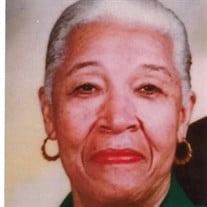 Yvonne Holt, age 89 passed away on Thursday, December 9, 2021, at her home in Eatonville, Florida. Joan Yvonne Johnakin Holt, the daughter of Milbia and Maggie Johnakin, was born on October 8, 1932, in Barnwell South Carolina. She was baptized as a child at Mt. Pisgah Missionary Baptist Church in Marion, South Carolina. Yvonne attended Hampton University a year prior to transferring to South Carolina State University. In 1954 she graduated South Carolina State University with a Bachelor of Science in Education. In 1957, she was united in marriage to Eugene Holt, Sr. in Marion, South Carolina and moved to Orlando, Florida where she began her career in teaching with Orange County Public Schools. Yvonne was initiated into the Orange County Alumnae Chapter of Delta Sigma Theta Sorority, Incorporated where she served faithfully until her health no longer allowed her to contribute her talents to the Chapter and the Organization. She also served faithfully as a member of the South Carolina State University Alumni Association, Central Florida Chapter. Yvonne’s life was centered around her family, her church, friends, and the staff and students at Winter Park High School during the 40 years she spent in teaching. She was a faithful member of Greater Trinity Baptist Fellowship Church until the decline of her health. Her spare time was spent reading and traveling. Her parents, Milbia and Maggie Johnakin and her husband Eugene Holt, Sr. preceded her in death. She leaves to mourn fond memories, her beloved family. Children: Eugene (Jacqueline); Cecil (Carla); Stepson: Dwight (Yvonne); Grandchildren: Jamilia; Zuri; Kiera; Azya; Cecil Jr.; Joshua; and Darius.; Step-grandchildren: Kimberly, Maureen, and Dwight, Jr.; Twelve Great-grandchildren; Sister-in-Law: Betty Spencer. Special thanks to her caregivers Charlie and Fatima Billings. A host of nieces and nephews.

Yvonne Holt, age 89 passed away on Thursday, December 9, 2021, at her home in Eatonville, Florida. Joan Yvonne Johnakin Holt, the daughter of Milbia and Maggie Johnakin, was born on October 8, 1932, in Barnwell South Carolina. She was baptized... View Obituary & Service Information

The family of Joan Yvonne Holt created this Life Tributes page to make it easy to share your memories.

Send flowers to the Holt family.